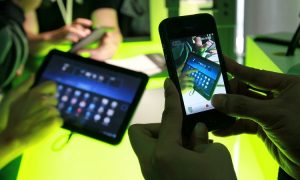 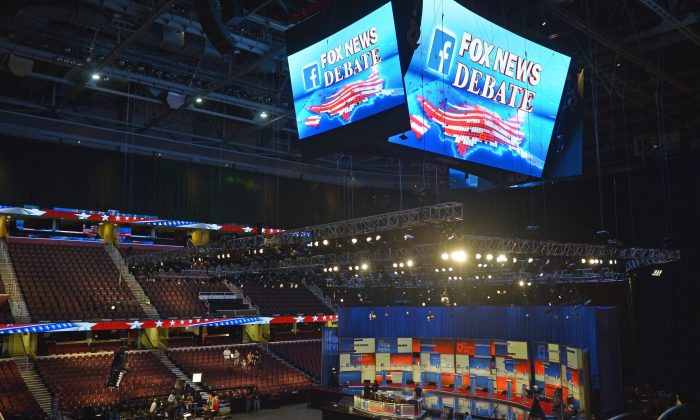 The debate hall for the Republican presidential primary debates is seen at the Quicken Loans Arena on August 6, 2015 in Cleveland, Ohio. (AFP/Getty Images)
Politics

The Republicans who are running for president will have their first debate on Thursday night on Fox News.

The roster of 10 candidates was determined based on an average of the five most recent polls.

Real estate magnate Donald Trump has been at the top of most of those polls, followed by former Florida Governor Jeb Bush and current Wisconsin Governor Scott Walker. See the full roster, as well as the location and other information, below the ad.

The debate is scheduled to start at 9 p.m. ET and last for two hours.

Both debates will be held at Quicken Loans Arena in Cleveland, Ohio.

Viewers can tune into Fox News to watch the debates, with limited options outside of that.

Live streaming will be available at the Fox News website and via the Fox News app, but both require a cable subscription log-in.

A legal live stream outside of these options doesn’t seem to be available, so your best bet if you don’t have cable will be to follow along on Twitter, Facebook, and live blogs. The full debate will be placed online on Friday, available to watch even without a subscription log-in.

Bret Baier, Megyn Kelly, and Chris Wallace will be moderating the debate and asking questions. The moderators told Politico they’ve spent the past several weeks cramming to prepare for the debate, and want to ask clear but hard questions. “People want to see how these candidates act,” Wallace said.

The next Republican debate is scheduled for Stepmber 16 at Reagan Library in Simi Valley, California, and will also be split into the top-10 candidates and remaining candidates. It will be aired on CNN.