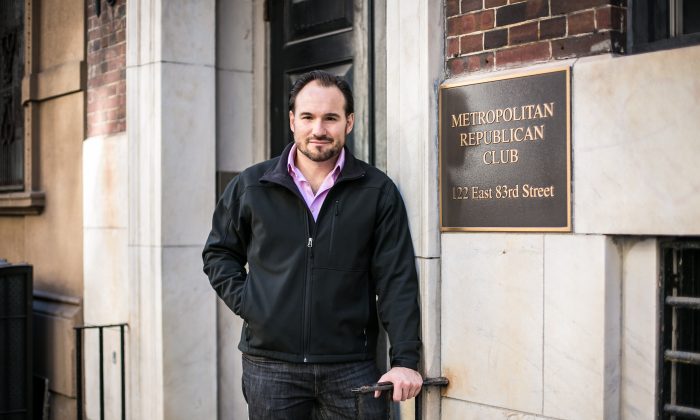 Allan Stevo outside the Metropolitan Republican Club in Manhattan on Feb. 6. Stevo says he and six others were removed from the respected club’s board because they supported Donald Trump. (Benjamin Chasteen/Epoch Times)
New York

NEW YORK—On the evening of Dec. 23, Allan Stevo got an unexpected phone call informing him he was being removed from the board of the Metropolitan Republican Club. The call came from his old acquaintance, incoming club secretary Jeff Goolsby.

Stevo pressed Goolsby for reasons—board members are usually automatically reappointed each year—and asked how he could appeal. Goolsby told him a meeting could be set up after the holidays.

After New Year’s, Stevo talked with club president Deborah Coughlin and chairman Ian Reilly. They sympathized with his wish for a meeting, but said unfortunately club bylaws specified such a meeting had to be held within seven days after notification of removal. The time had passed. Nothing could be done.

Stevo consulted the bylaws and learned that such notices needed to be issued in writing one month prior to the removal and by the sitting club secretary, not by someone who had yet to take office.

He also learned that he was not the only board member being removed. Joining him were Alain and Georgia Palmieri, Sandra Chase, Michael Javelos, and the Brumberg brothers, Matthew and Ryan. What the group had in common is that they were all strong supporters of Donald Trump.

The seven has also been active in demanding that club leadership be more transparent and responsible on a variety of fronts, including auditing the books, which has not been done for years, according to multiple sources. When Alain Palmieri offered to pay for an audit, club president Deborah Coughlin angrily refused, according to Javelos.

The Metropolitan Republican Club is a storied New York institution that is now in trouble. Founded in 1902, its first members included President Teddy Roosevelt (1901-1909) and Charles Evan Hughes, who would go on to become governor of New York, U.S. Secretary of State, chief justice of the Supreme Court, and Republican nominee for president in 1916.

In its 115 years, the club has been a home for mayors, governors, and Congress members and a place for the city’s Republicans to socialize and strategize.

Yet the candidacy of New Yorker Donald Trump has plunged this esteemed institution into crisis, one that became visible on Jan. 31 when the club kicked the “Trump seven” off its executive board.

Those removed aren’t deadbeats, nor are their connections with the club trivial. Alain Palmieri is the grandson of one of the club founders; he, his father, and his grandfather have all been lifetime members. His wife, Georgia, a member since 1970, served on the board since 1998, was club secretary for serveral terms, and also ran the club’s very successful speaker series. Sandra Chase is a longtime Republican activist who served as a delegate for John McCain and put together Newt Gingrich’s entire New York delegate slate in 2012. Michael Javelos, retired, is a longtime Republican. Stevo has a real estate business and works as a political consultant. The Brumbergs have an investment management company.

In telling the story of the club’s crisis, the Epoch Times relied heavily on interviews with Chase, Javelos, and Stevo.

Reached by phone late on the afternoon of Feb. 4, President Coughlin promised to call on Feb. 6 for an interview. When she failed to do so, a voice mail message left for her was not returned. The newly appointed secretary Goolsby did not respond to two voice mail messages. Frederic C. Umane, who chaired the meeting at which the board members were removed, refused when reached by phone to comment, except to affirm that he is a member of the club.

The conflicts that led to the removal of the Trump seven likely began after presidential candidate Sen. Ted Cruz visited the club on March 22 last year.

Prior to his visit, a meeting was held in the Teddy Roosevelt Room, a handsome ground floor office that looks out over 83rd Street.

The office’s double doors were open and the voices inside echoed out into the hallway. Standing there, a club member (who wishes to remain anonymous) listened as Republican Party officials and club officers decided to take sides in the primary fight. They planned to break the same unwritten protocol that the Democratic National Committee was accused of breaking by only supporting Hillary Clinton in the primaries.

A Republican leader from Brooklyn presented a plan for keeping Trump from winning 50 percent of New York state, according to the club member.

The Cruz gathering on March 22 was attended by the Republican state chair, five county chairmen, and 78 district leaders, according to Chase.

After the visit, the Palmieris, Chase, Javelos, and Stevo told Coughlin the club could not play favorites. If it hosted Cruz, it needed to also host Trump and Gov. John Kasich, the two other Republican candidates in the New York primary.

On April 12, Cruz’s wife, Heidi, appeared at the club with a group of young Republicans, and on April 18, Ted and Heidi Cruz came together for an event.

Javelos thinks the fissure within the club began with the Trump seven’s criticism of the exclusive support shown for Cruz.

In the April 19 New York primary, Trump won every county except Manhattan. According to Chase, the leadership of the club “pulled out all the stops to keep Trump from winning his home county. And then they made a big deal about it.”

Tensions deepened when Georgia Palmieri brought political consultant Roger Stone to the club in May, after Trump was declared the presumptive nominee, to speak on why Trump was the best candidate.

On June 13, former gubernatorial candidate and Trump friend Carl Paladino spoke, and tensions broke out into the open.

Paladino said the problem with Trump’s opponents is that they are a self-satisfied elite, and he called out by name Republican state committee chairman Ed Cox. Paladino’s message was that the people had spoken; the elite had lost and should go along with Trump.

Roger Stone Claims He Was Poisoned, May Have Been Polonium

Javelos said most club members agreed with Paladino’s remarks, but opposition toward the Trump seven from Coughlin, Reilly, and state and county Republican officials deepened.

The agenda for a special board meeting on June 23 called for kicking Georgia Palmieri off the board and out of the club, because of her criticism of Coughlin. Palmieri was spared, but perhaps there was collateral damage.

Stevo defended her, saying those seeking to remove Palmieri were “acting like Democrats.” He believes that was the day he was singled out for removal from the board.

Stevo said there were now running conflicts at the board meetings and in between the meetings. In the run up to the general election, he heard board members complain about Trump and entertain the idea of voting for Hillary Clinton.

Prior to the Jan. 31 annual meeting, Stevo emailed individual members listing four violations of the club’s bylaws and possible violations of state law in the proposed removal of the Trump seven.

He and the others came to the meeting ready to make their case to the membership.

Frederic Umane was brought in to chair this meeting. With the support of the anti-Trump board members, Umane shut down the Trump seven and did not allow them to speak.

Umane is not a club officer. He is a lawyer and the Republican chair of the NYC Board of Elections. Prior to the annual meeting, he was unknown to the Trump-supporting board members.

Chase said for Umane to use his authority and credibility as a high-ranking party official to chair “an illegal and crooked meeting” was deeply inappropriate.

“This is a ‘hate Donald Trump’ movement,” she said.