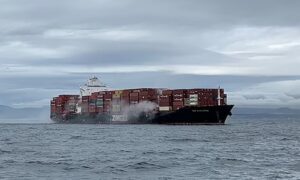 There were reports of a bright fireball late on Sunday night and Monday in Tennessee, Alabama, and Mississippi.

A number of reports were posted on the American Meteor Society website.

UPDATE:  Space.com later reported that it was a Capricornid meteor, which was traveling at 54,000 miles per hour. It was captured by NASA.

“This was so very exciting for me. The colors were beautiful,” wrote one user, Liz W., from Nashville, Tenn.

Another person from Oakland, Tenn., wrote that the fireball was “low moving, passed behind cloud bank and glow could be seen through clouds.”

“The fire trail was a slender taper going from origin to point within the spacing of nine of the original diameter … the [colors] were sharp:white core, moss green outside it, traces of blue.,” wrote another.

“It almost looked like this fireball was going to make impact,” another wrote.

The fireball sighting coincide with the Perseid meteor shower, which starts in mid-July to late August each year.

It is unclear if the “fireballs” that people saw in the southeastern U.S. had to do with the Perseids.

“It was larger than any meteor I have ever seen,” wrote one person.

On Twitter, at least one person said they heard a “loud boom.”