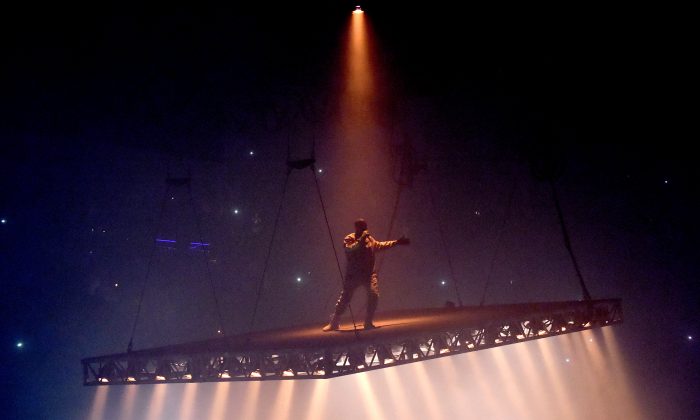 Rapper Kanye West was released from a Los Angeles-area hospital after spending nine days there, according to reports on Dec. 1.

West, 39, was hospitalized at the UCLA Medical Center due to a nervous breakdown, according to reports. It came after two concerts in which he interrupted his set to rant about Donald Trump, Jay Z, and Beyonce before cutting one of them short. Following the second concert, West called off the remainder of his “Saint Pablo Tour.”

Sources close to the rapper told TMZ and People magazine that the rapper is still in need of psychological and medical care following the hospitalization. It’s unclear when he’ll return to touring.

“Kanye is at home with Kim and the kids. He seems okay and happy to be home. Kim’s family is visiting,” a source close to West’s family told People magazine. “Kanye will continue to receive treatment and help with how to cope with stress. He needs to learn how to better balance his work and family life.”

The Los Angeles Times, meanwhile, reported on a 911 call, apparently from West’s doctor, about an incident involving the singer. “Don’t let him get any weapons,” the dispatcher was quoted as saying.

“I think, he’s definitely going to need to be hospitalized,” the caller told the 911 dispatcher. “I wouldn’t just do the police by itself.”

A dispatcher later asked the doctor, “What is the medical condition he’s having, sir?” The recording then cut off, according to the LA Times.

People magazine reported, specifically, that West was hospitalized for sleep deprivation and exhaustion. Sources told the magazine he wasn’t committed to the hospital against his free will.

“He went to the hospital at will under the advice of his physician,” a source added, saying he “was not restrained” and “went freely.”