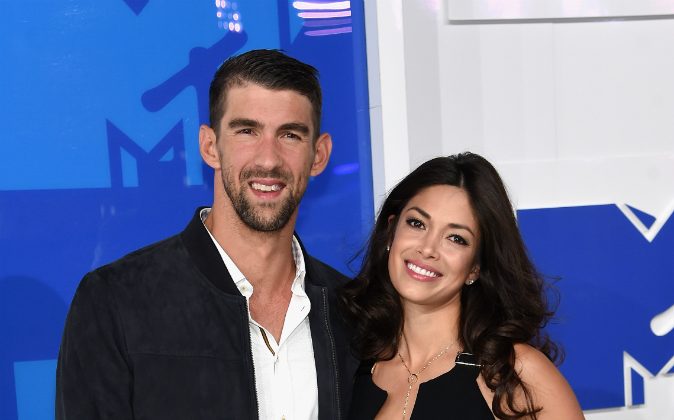 The Arizona Central reported that Phelps and Johnson got married in a private ceremony in Paradise Valley, Arizona, on June 13. According to a wedding record posted by the newspaper, Phelps’s agent, Peter Carlisle, officiated the ceremony.

Phelps and Johnson have yet to publicly confirm the reports. However, the pair has dropped hints on social media. Johnson posted a photo to Instagram on June 13 that hinted at the big day.

“Such a memorable night with my lil fambam,” she captioned a photo of herself, Phelps, and the couple’s infant son, Boomer Roberts Phelps.

A scroll through Johnson’s Instagram feed appears to show several photos of them wearing a wedding band after the reported wedding date.

Phelps participated in a Facebook Live session on Oct. 21 and appeared to have sported a wedding band on his left finger. When fans took notice of it, Phelps denied it, saying: “It’s on my right hand—good try, though. It’s on my right, soon it’ll be on my left.”

Throughout the Rio Olympics, Johnson was referred to as Phelps’s fiancee and she didn’t give any indication that they had gotten married, considering she said in an August interview with “Access Hollywood” that they were still in the planning stages.

“We have a date. It’ll be small and intimate for the wedding, and then we’re throwing a massive bash for everyone in the States,” Johnson said. “We’re kind of getting things rolling. I’ve been planning as we’ve been leading up to this. I think I have the wedding in order and now it’s on to the party for the fun!”