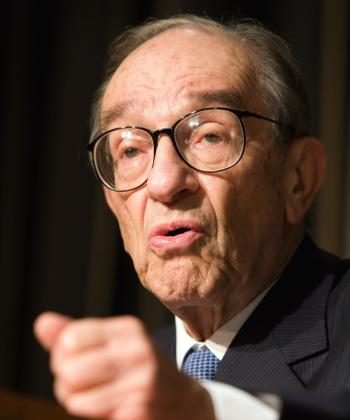 Former Federal Reserve Chairman Alan Greenspan sees the U.S. housing market to settle next year, in an interview with the Wall Street Journal. (Stephen Jaffe/IMF via Getty Images)
US

By Antonio Perez
Print
NEW YORK—In an interview with the Wall Street Journal on Wednesday, former Federal Reserve Chairman Alan Greenspan offered his views on the housing market and the overall U.S. economy, believing that housing prices should see bottom sometime in 2009.

“Home prices in the U.S. are likely to start to stabilize, or touch bottom, sometime in the first half of 2009, though prices could continue to drift lower through 2009 and beyond,” Greenspan said in the interview.

Falling housing prices was deemed a major reason for the recent economic slowdown and the related tightening of the credit market. The housing bubble burst as many subprime borrowers defaulted on their loans—causing a chain reaction of falling housing prices across all segments.

Greenspan believes that a key of economy growth lies within the renewal of the real estate industry.

“Stable home prices will clarify the level of equity in homes, the ultimate collateral support for much of the financial world’s mortgage-backed securities,” he said.

Today, a growing inventory of unsold homes—coupled with tightening credit requirements—has stifled a healthy market. The high cost of borrowing money is a disincentive for many potential buyers.

To Greenspan, “U.S. home prices will stabilize only as the current huge 800,000 excess of vacant single-family homes for sale is dramatically reduced and prices deflate to the level consistent with the historical rate of return on owning a home that prevailed before the price surge.”

“The most effective initiative, though politically difficult, would be a major expansion in quotas for skilled immigrants,” Greenspan stated in the interview. “Skilled immigrants tend to form new households, by far the most important source of new home demand.”

While Greenspan’s proposal may not stick in Washington, it does bear some reason. Many of the hardest hit states for housing foreclosures—California, Arizona, and Texas—are regions with large immigrant population. By encouraging new families to settle, some immigrants may opt to spend their wages in the United States, instead of mailing them home.