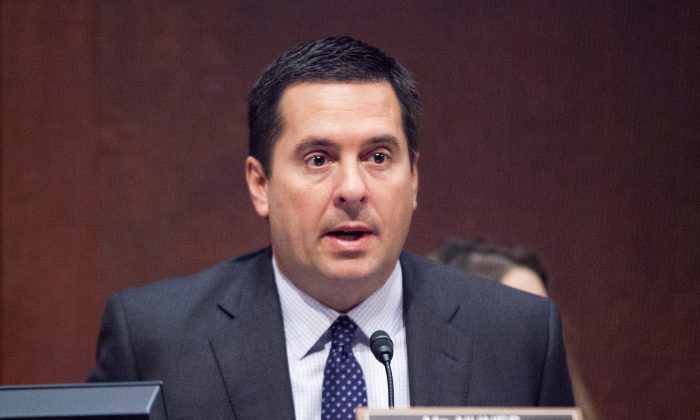 The information “can only be addressed in [a] closed session,” Nunes said, adding it will take place later in March.

“I’m still not going to tell you who our sources are,” he also said, according to live video footage of the press conference.

He added there was “no wiretapping of Trump Tower. That didn’t happen,” refuting a tweet President Donald Trump made earlier in March when he claimed former President Barack Obama surveilled him, suggesting he was a “sick guy.”

Nunes appeared on Fox News last night, elaborating on information he received revealing that members of Trump’s transition team were under surveillance.

Under the law, Americans who are caught during legal surveillance of foreign people must be protected by keeping their names hidden, or “masked.” Nunes suggested that members of Trump’s team—and possibly Trump himself—had their names “unmasked” and that information was distributed through the intelligence community.

“It appears like this was all legal surveillance from what I can tell,” Nunes said, but also added that he had suspicions.

“You have to ask why were names unmasked,” he said. “Maybe someone has a good reason for it but not from what I’ve been able to read.”

On Friday, Nunes also confirmed former Trump campaign manager Paul Manafort has volunteered to testify before the House Intelligence Committee on alleged connections to Russia. “We thank Mr. Manafort for volunteering and encourage others with knowledge of these issues to voluntarily interview with the committee,” he said.