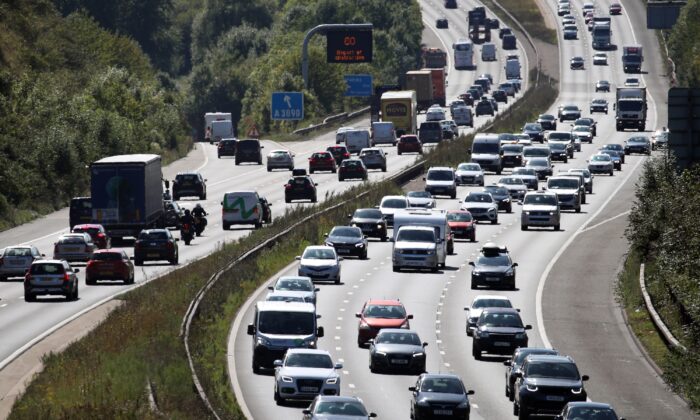 Traffic along the M3 motorway near to Winchester in Hampshire, England, on Aug. 23, 2019. (Andrew Matthews/PA Media)
UK

Remote Driving Could Be Exploited by Cyber-Attackers and Terrorists

Remotely driven cars could make it easier for terrorists to launch attacks as they can avoid being in a crash or facing their victims, the Law Commission said on Friday.

Cybersecurity, in general, is also “an issue of acute public concern,” the Commission said, noting that the Society of Motor Manufacturers had said failure in this area may “undermine public confidence in the technology” and also “present genuine risks to public safety.”

It’s part of the risks laid out by the Law Commission—an independent body that advises the government on the law—in its consultation paper (pdf) on how to regulate remote driving in England and Wales.

The feedback of the consultation, which closes on Sept. 2, will inform the Commission’s recommendations on how to reform road traffic laws to include remote driving that is due to be submitted to the government by January 2023.

Remote driving is currently being used in controlled environments such as warehouses, farms, and mines. The new paper considers how the existing legal framework applies to remote driving on roads shared with other road users.

Commenting on the new paper, Nicholas Paines QC, public law commissioner, said the technology is already capable of being used on the roads.

“We hope our issues paper can contribute to a healthy debate about the appropriate regulation of this technology and what can be done to maximise protection of road users while encouraging innovation,” Paines said.

“We look forward to hearing views on the challenges and possible ways to solve them,” he added.

Current road traffic law doesn’t explicitly require a driver to be in a vehicle, but some provisions designed for traditional driving—such as those requiring drivers to have “proper control” of the vehicle and a “full view of the road and traffic ahead” and prohibiting drivers to use mobile phones or handheld devices—may have “a chilling effect” that deters “some worthwhile projects,” the paper said.

But the different mode of driving also brings a different set of risks and challenges that need to be considered in any future legislation, such as how to mitigate risks if connectivity is lost and who’s liable when an incident occurs because of connectivity loss.

Other challenges include how drivers can remain aware of their surroundings through a screen without the “feel” of acceleration; how can the risk of fatigue, motion sickness, and distraction be overcome; and how to prevent unauthorised takeover of vehicles.

Remote driving from abroad will also present a plethora of new questions, the papers said, such as not being able to do an alcohol test before the driver sobers up and involving a cumbersome extradition process.