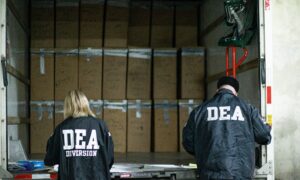 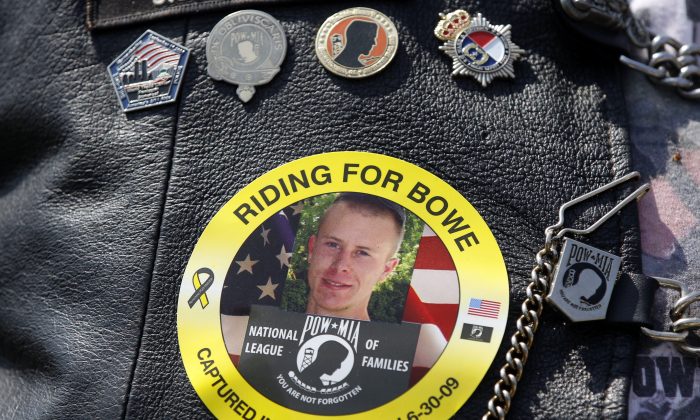 The image of Army Sgt. Bowe Bergdahl of Hailey, Idaho, who is being held captive in Afghanistan, is worn by an audience member as his father Bob, not pictured, speaks at the the annual Rolling Thunder rally for POW/MIA awareness, in Washington, Sunday, May 27, 2012. (AP Photo/Charles Dharapak)
US

Remembering America’s Only POW in Afghanistan

Sgt. Bowe Bergdahl, 27, has been captive in Afghanistan since June 2009, the only American left behind.

“I think about him and pray for him every day,” wrote Jane Gannon on Memorial Day, May 27, on the Facebook page “Support Bowe.” An article written by Jessica Robinson for the  Northwest News Network last year bespoke the determination of people in Bergdahl’s hometown of Hailey, Idaho, to keep his memory alive and cherish the hope of his safe return.

“As a community you feel helpless. Because, there’s not a lot you can do. Only the people in Washington can do this,” local resident Jane Drussel told Robinson. Drussel owns a local craft store that keeps a steady supply of yellow ribbons—a popular item in the town displayed in support of Bergdahl and his parents, Bob and Jani.

His parents will attend a community gathering organized for their son by their neighbors on June 22.

Debbie O’Neill, the event organizer, told the Idaho Mountain Express that the small-town event has been growing.

“We’re expecting about 500 POW/MIA motorcycle riders to come to town from Idaho and Utah. It’s a rally to bring Bowe back,” she said. “I felt that it was time that Hailey and all of Blaine County show all the world that we want Bowe back.”

Early last year, the Taliban had reportedly agreed to release the prisoner of war in exchange for Taliban captives in Guantanamo Bay. Robinson reports that it was unclear what happened to botch the deal, but increased tensions in Afghanistan at the time and stipulations made by Washington on the prisoner exchange may have prevented Bergdahl’s release.

“CIA director nominee John Brennan sent a powerful message on Thursday when he wore an accessory that honored prisoner of war Bowe Bergdahl, an American captive held by the Taliban since 2009,” notes a post on SupportBowe.org, quoting a February Huffington Post article following a Senate Intelligence Committee hearing.

The military does believe Bergdahl is still alive and is being held in the border region between Afghanistan and Pakistan, reported USA Today on Monday.

O’Neill told Robinson she keeps up her support for Bowe Bergdahl, but also for the sake of his father, whom she sees often in town:  “We don’t speak a lot about this, but you can see by the look on his face, and the sadness … and it’s … to my heart.”