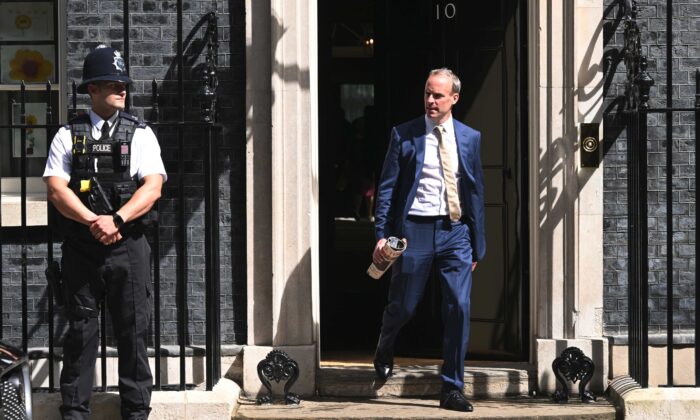 Justice Secretary Dominic Raab is considering introducing electronic “sobriety tags” for criminals who have been released from prison after serving time for alcohol-related offences.

A similar scheme was rolled out in Wales last year and the plan is for 1,900 former inmates in England to be given the tags between now and 2024.

The tags check alcohol levels in the wearer and are a way of enforcing sobriety in persistent offenders who have committed violent or other offences while drunk.

Raab said: “We’ve seen that alcohol tags work—with tagged offenders complying 97 percent of the time … This is a big step forward using the latest technology to cut the link between alcohol abuse and the crime—and make our streets safer.”

Alcohol tags are the latest attempt by the Ministry of Justice to improve monitoring of released prisoners in an attempt to prevent recidivism.

Since 2014 convicted paedophiles and sex offenders have been forced to undergo polygraphs—better known as lie detector tests—while on parole, and in January the government announced plans to extend polygraph testing to those convicted of domestic violence.

On Wednesday the Ministry of Justice said that some former inmates could be given alcohol bans by their probation officers and could be sent back to jail if they breach those bans.

The government also announced plans to invest £183 million ($221 million) in the sobriety tag project by 2025 and to bring the number of those tagged to 25,000.

Last week the National Audit Office (NAO) said the government was not getting value for money from its tagging schemes.

The NAO said Her Majesty’s Prison and Probation Service (HMPPS) had launched a number of new tagging schemes but it said: “It has not achieved the fundamental transformation of tagging services it intended and has wasted £98 million through its failed attempt to develop the Gemini case management system.”

The report went on to say: “HMPPS’s decision to stop Gemini in 2021 was well-founded in the circumstances and protected the taxpayer from further losses. However, its lack of focus on monitoring benefits and continued poor evidence base means that—more than 10 years into the programme—Parliament still does not have a clear view on what it has achieved or whether electronic monitoring is an effective intervention.”

Shadow justice minister Ellie Reeves said of the NAO report that it was “yet more evidence … this soft-on-crime Conservative government is letting criminals off and letting victims down through its incompetence.”