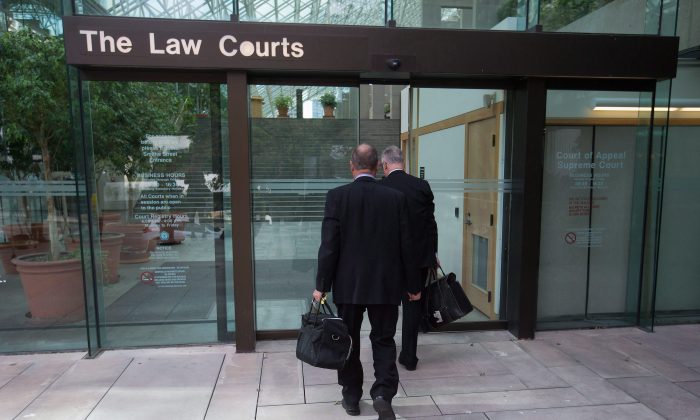 The B.C. Supreme Court in Vancouver. A system geared to meet the needs of victims would do a lot to counteract court delays, says the federal ombudsman for victims of crime. (The Canadian Press/Darryl Dyck)
Canada

OTTAWA—Making sure those who experience the biggest impacts of crime have the support they need would do a lot to speed up the wheels of justice, says the federal ombudsman for victims of crime.

“We have to have a criminal justice system that is effective and efficient,” Sue O’Sullivan said in an interview ahead of the Nov. 7 release of a set of reports on how the Liberal government could keep victims in mind as they prepare to introduce reforms.

“Let’s look for a system that is going to meet the needs of victims instead of looking for alternatives when the system isn’t working.”

The need to improve the criminal justice system has been given an increased sense of urgency since last summer, when the Supreme Court released its groundbreaking ruling R v. Jordan, which came down hard on serious delays that can mean years pass by between the laying of charges and the conclusion of a trial.

The top court imposed strict new ceilings on the amount of time a case could take to make its way through the system—18 months in provincial courts and 30 months in superior courts. The only remedy for going over the limit is a stay of proceedings, no matter how serious the charge.

The impact that court delays—and having cases tossed as a result—can have on victims of crime was one of the issues that came up over the summer as O’Sullivan held cross-country consultations to gather perspectives from victims and advocacy groups on criminal justice reforms.

“Court delays are typically cast in terms of the rights of the accused but not the rights of victims,” said one of the five reports released Nov. 7.

“Yet victims also have an important interest in a criminal justice system that is not delayed,” the report said. “Having charges stayed as a result of delays hurts victims. Remedies that emphasize both the rights of the accused and the rights of the victim must be found.”

In an interview, O’Sullivan argued that giving victims of crime the resources and information they need can cut down on judicial delays.

She pointed to a pilot program in England and Wales that boosted support for victims and witnesses, including with basic needs such as child care, addressed concerns such as fear of intimidation and provided them with greater communication throughout the process.

O’Sullivan said those who took part in her engagement process understood systemic root causes of crime often blur the line between victim and perpetrator, but they would like to see a greater balance between their rights and the rights of the accused.

One of the reports focused on bail reform, including the Liberal campaign promise to create a reverse onus on bail for those who have previously been convicted of intimate partner violence. A commitment to toughen bail conditions in domestic assault cases was also in the mandate letter.

The report urges the federal government to act on this, but also recommends ensuring victims are considered in all aspects of bail reform, such as by requiring judges to ask whether a victim has been consulted about their safety and security needs as they decide whether to grant bail.

The mandate letter for Wilson-Raybould said sentencing reform should result in greater use of restorative justice. Many of those who participated in the consultations expressed apprehension over this, including the concern it could be a way to reduce penalties, or avoid them altogether.

There were also concerns about restorative justice being used for gender-based violence, given the power imbalance these cases can involve.

A common theme throughout the reports is that victims need stronger and better enforced rights, but also more information about what those rights are in the first place.

O’Sullivan said that could be helped by involving everyone in the justice system, from police officers to the federal government, in doing more to create awareness of the Canadian Victims Bill of Rights.

Wilson-Raybould said in a statement that she has included victims groups in her consultations on criminal justice system reform, including a roundtable devoted to these issues.