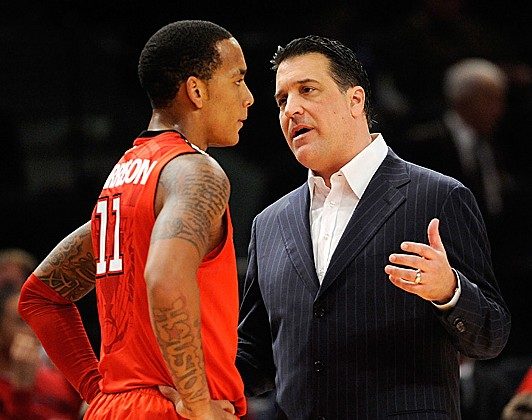 Red Storm Have Better Days Ahead

After St. John’s (7-7) dropped their second straight Big East contest Tuesday night to Louisville (13-2), Cardinals’ coach Rick Pitino was asked whether the Johnnies’ forgettable shooting night (28.1% from the floor) was the result of his team’s stellar defense or just one of those days for St. John’s.

“I think it was a combination of both,” said Pitino, whose team came into the contest ranked 10th out of 338 Division One teams in field-goal percentage defense at 36.6% on the season.

Two assumptions were made in that question-and-answer when trying to pinpoint the Red Storm’s shooting problem; the team struggled similarly, shooting (just 36.2%) in their previous game, a loss at Connecticut (12-2). The first is, it’s not a talent problem.

Coach Steve Lavin, who had quite a knack for bringing talent to UCLA in his previous coaching-spot, has continued his recruiting prowess at St. John’s. Four of his five eligible freshmen were rated four-star recruits (out of a possible five stars) by rivals.com, while junior-college transfer God’s Gift Achiuwa was given a three-star rating.

Pitino, who’s been coaching college basketball for 26 years now, knows their stories well. “I’ve never seen this much youth on a basketball team,” said Pitino before about gushing how much talent they’ve already accumulated.

Yet, in addition to their youthful talent, St. John’s does not concede anything on the court.

Just when Pitino’s Cardinals extended the lead to 26 points at 69–43 with 4:56 left Tuesday night, interim-coach Mike Dunlap called timeout to try and reverse ship, even if it was too late for a win.

The already tired St. John’s lineup (four of five starters logged more than 32 minutes) seemed more than happy to oblige, pulling off an 11–0 run over the next three minutes by turning up the pressure on defense and finally getting a couple shots to fall.

Saturday at Connecticut saw a similar effort. Trailing 65–44 with just over nine minutes remaining the Red Storm kept coming, reeling off a 15–6 run to make it the Huskies sweat out what they thought might be a blowout win.

Even more telling, the close wins aren’t enough for their driving players. Said their clearly disappointed second-leading scorer Moe Harkless Tuesday night after the loss, “We don’t like moral victories, but we just have to look at the positives for the game and just try to move forward and get better.”

St. John’s is certainly getting better, as evidenced by their efforts against highly-ranked foes Louisville and Connecticut. They just need to be able to turn it up a notch before falling behind by 20-some points.