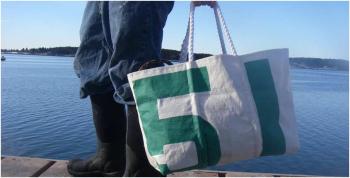 Sea Bags: A Perfect Start Up

Sea Bags, a manufacturing company in Portland, Maine, offers all the benefits of a perfect job, and that is exactly the way owners Hanna Kubiak and Beth Shissler planned it. Both grew up in a small-town Maine environment, had their time in big city corporate careers, and decided to make a radical change and do what is often thought impossible.

In 1999, Hannah Kubiak looked at the bags her dad had been making out of canvas and found a better material—used sails from the local sailboats. These sails were being thrown way when they became too worn. Hannah tried cutting them into shapes for carry-all bags. As she saw it, she’d give this wonderful material a second chance. Her business grew and in 2003 she met Beth Shissler, after which Hannah started selling on a wholesale basis to Beth who bought them for her mother’s small shop.

As Beth and Hannah’s manufacturing and buying partnership grew, they realized that they had shared values regarding business. In 2004, they started Sea Bags together. Beth had been working in the corporate world, but she says they have a saying: “We all come home to Maine.” The state lends itself to recycling and to entrepreneurs, Beth says.

In their business model, one of the missions was to keep manufacturing and production jobs in Maine, to provide career opportunities to the people in town so they wouldn’t have to do what Beth and Hannah had done—leave Maine to find a career. The other two legs of their business model were to operate in an eco-friendly way and to support the local community. So, they hire local people to work in the shop and, additionally, have a program to work with released women prison inmates, giving them a second chance.

The company’s sourcing is sustainable because they use worn-out sails, a supply that will be constantly renewed as sails wear out. Going even further, they find uses for the scraps, recycling even more and cutting down on trash that would otherwise be going to landfills.

Committed to supporting the local community, they write into their budget each year a set timeframe during which they produce their “Pink Ribbon Bag.” The proceeds go to the Maine Cancer Foundation.

Having learned to sail when they were young, they wanted to share that ability with children who otherwise would not be able to learn—so they set up a Sailing Scholarship, which they also support. And they had a special project supporting the women’s “Team 7,” a three-woman team competing in the Olympics. They raised $20,000 by selling bags autographed by the team.

Their business now is marketed over the Internet and in wholesale outlets and at their local shop, which is positioned so that people strolling by can stop in and watch. It also offers great products for tourists to take home for gifts.

They have received recognition from the region’s Convention Center for bringing people in to the area. They have been careful to manage their growth so that the business can develop into a year-round operation and they can keep their employees busy for the whole year. All in all, these women have achieved great success in being able to get what they really wanted by climbing down the corporate ladder.