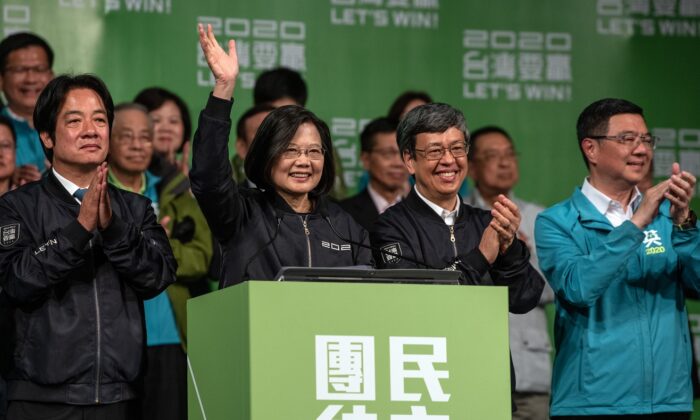 Tsai Ing-wen (C) waves as she addresses supporters following her reelection as President of Taiwan in Taipei on Jan. 11, 2020. (Carl Court/Getty Images)

As we move cautiously to the post-CCP virus phase, many are necessarily considering how to do so. Most obviously, how to revive the economy without jeopardizing our people or, worse, rekindling the pandemic.

Of almost equal importance is how to deal with the country that instigated the worldwide epidemic in the first place—communist China—how to impress upon it that next time it has a viral outbreak, the regime must be honest, indeed, totally transparent about what occurred, even if that means revealing information that is embarrassing to the regime.

We don’t want another disaster with thousands or even millions of deaths across the globe, not to mention enormous financial dislocation in almost every country on Earth.

Some have suggested confiscating some or all of China’s immense holdings in the West. Although worth studying, this might engender economic retaliation that we can ill afford at this time.

There is, however, another punishment that costs virtually nothing and would likely be far more potent on the psychological/emotional level.

The United States should abandon the one-China policy that has been in place for decades and recognize Taiwan (aka the Republic of China).

This would strike at the heart of the CCP’s (Chinese Communist Party) self-image, humiliating and weakening them in the eyes of the world. It would, in essence, put the People’s Republic of China (PRC) in its place and likely even have economic ramifications, making its Belt and Road Initiative less attractive to nations around the globe.

The People’s Republic has always insisted on being the sole representative of China, brow-beating other nations to go along, with the implication that one day the regime would either invade or subsume Taiwan anyway.

They acted that way in 1971 when the PRC, upon being invited into the United Nations, insisted Taiwan be ejected from the organization. There could only be one China.

It’s fair play then that recognition for the island nation be accompanied by renewed full membership in the U.N. and its various subsidiaries. This would include the World Health Organization that has behaved so reprehensibly during the pandemic, acting essentially as toadies for the CCP. (WHO must also divest itself of its leadership.)

Many of the U.N.’s totalitarian countries, of which there are a fair number, may resist this, but given the global suffering from the pandemic and the fact that the United States is by far the biggest financial supporter of the organization (and currently has a president who is willing to withhold funds), this membership, and state-to-state recognition in many instances, probably can be achieved.

A mere 15 U.N. member states (out of 193) currently recognize Taiwan, none of which have relations with Beijing and include the likes of St. Lucia, Tuvalu, and Swaziland. That number could grow substantially.

Taiwan more than deserves it. It has navigated the pandemic with extraordinary skill given its proximity to the source, resulting in only six deaths in a country of over 23 million. They are also a thriving democracy.

It wasn’t always that way. Taiwan’s original leader and president, Gen. Chiang Kai-shek, while nowhere near Mao’s level as a despot, was no shrinking violet and was a ruthless strongman himself. Democratic elections didn’t exist.

That gradually changed from the late 1970s to the 1990s. Taiwan is now a functioning democracy off the coast of the world’s most populous totalitarian state.

I can attest to that personally, having been part of small delegation to observe Taiwan’s most recent election in early January. I attended huge election-eve rallies for both political parties—the Democratic Progressive Party and the Kuomintang (Chiang’s old party).

When I was there, China was beginning to restrict tourism to the island. It didn’t want its citizens to see a free election. Maybe that spared the Taiwanese the virus coming over with them. Shortly thereafter, Taiwan figured things out and shut the door to the mainland themselves.

I had left the island by then. So far, I am asymptomatic, and since it has been two months, I’m assuming I will remain so. But I developed an affection for the place.

It would great to see Taiwan’s recognition become a festering sore in the side of the world’s most dangerous regime. Who knows? Maybe such recognition would help it unravel.

Roger L. Simon—The Epoch Times’ senior political columnist—is also an author and screenwriter. His most recent book is “The GOAT.”