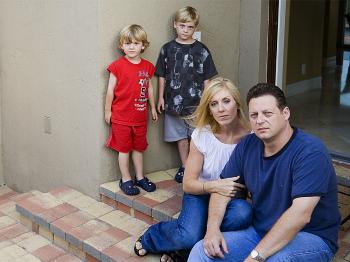 NIGHTMARE HOME: (R-L) John Willis, wife Lori, and their children, Brannon, five, and Alex, three-and-a-half, outside their home with Chinese drywall in Florida in April. (Yelena Bleiman)
US

Charlotte Cuthbertson
Senior Reporter
Charlotte Cuthbertson is a senior reporter with The Epoch Times who primarily covers border security and the opioid crisis.
View profile
Follow
biggersmaller
Print
Dubbed America’s “silent hurricane,” toxic drywall from China has contaminated thousands of homes, causing residents to complain of nosebleeds, headaches, respiratory problems, dizziness, and other health issues. Lawsuits poured in from homeowners, many whom have moved out of their homes and now face rent and mortgage payments. They cannot sell their homes.

Used in construction, the tainted drywall emits a sulfur gas that mixes with moisture in the air to produce sulfuric acid—a highly corrosive acid found in acid rain. Many affected houses have a rotten-egg-like smell, metal turning black, and failing appliances.

Most of the 2,100 homeowners who have complained about the drywall live in Florida and Louisiana. A domestic shortage of drywall following hurricanes Katrina and Wilma and nationwide building booms meant companies imported more from China. Enough of the tainted material was imported to build an estimated 60,000 to 100,000 homes nationwide, but around half ended up in Florida.

Imports have been banned from China and safety officials are continuing to investigate. A task force is developing a screening process and remediation method, said Inez Tenenbaum, Consumer Product Safety Commission (CPSC) chairman.

There is a “strong association” between Chinese drywall, rotten egg-smelling hydrogen sulfide, and the corrosion of metal in U.S. homes,” according to a report by the CPSC released Nov. 23.

“In ways still to be determined, hydrogen sulfide gas is being created in homes built with Chinese drywall,” the CPSC statement said. “Earlier studies found large amounts of elemental sulfur in the Chinese drywall.”

One family in Florida suffered serious health issues that they attributed to their new home, built with Chinese drywall. The three-year-old boy underwent an operation for a sinus infection that continued to worsen. The doctor said they removed something that looked like rubber cement. He said he’d never seen something that looked that bad in a kid so young,” the boy’s father John Willis said.

One month after moving out into a rental, all symptoms disappeared. Willis said the last time they went back to the house the odor was overwhelming, and now, the real estate agents won’t even go inside.

“It was our dream home, but it’s gone,” Willis said.

Their neighbors, the Schultheis’s, moved to Georgia. Mary Ann Schultheis had severe sinus infections, requiring courses of antibiotics. Nosebleeds were common, as were dizziness and throat irritation. Her husband doubled his reliance on asthma inhalers while they were still in their new Florida home with Chinese drywall. The couple bought two new plasma TVs in two years. One has been fixed twice, the other one once. Light bulbs that usually last years fizzled out quickly.