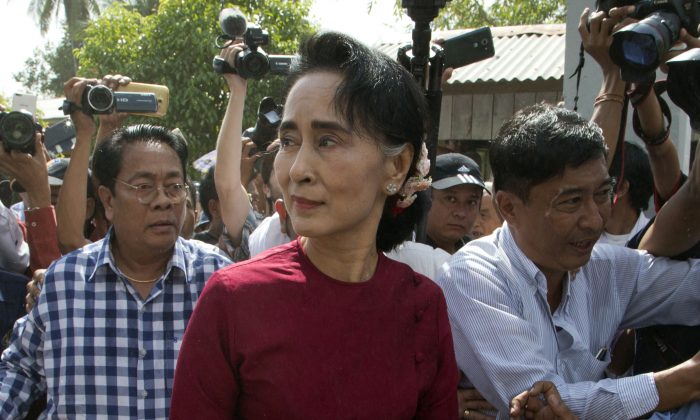 YANGON, Burma — Winning Burma’s election turned out to be easier than expected for Aung San Suu Kyi and her opposition party, but steering the country will be a test of how the Nobel Peace laureate balances her moral vision with political realities.

Almost complete returns released by the Election Commission by Sunday showed Suu Kyi’s National League for Democracy with a whopping majority that gives it control of the lower and upper houses of Parliament, along with enough votes to dictate who will be president when the new lawmakers convene their first session next year.

“The election result represents the people’s retribution against the military, which kept them under its boots for decades,” said Aung Din, a former political prisoner and prominent journalist. He added that the extent of Suu Kyi’s victory stunned everyone — the NLD, the military and the world’s foremost experts on Myanmar like himself.

Burma was under military rule from 1962 until 2011, when the elected but army-backed party took power after 2010 elections, which were boycotted by the NLD.

With the military automatically allotted 25 percent of the seats in each chamber, the NLD had to win two-thirds of the seats being contested to get the majority — not just 50 percent plus one. It met its mark easily. By Sunday morning, it had won about 78 percent of the combined houses — 387 of the 498 non-military seats, while the ruling military-backed Union Solidarity and Development Party had just 41.

Suu Kyi won points in the past by confronting the military, but now that they will be partners in ruling the country, she will need the generals on her side in order to push through her party’s agenda. At the same time, she has to meet the huge expectations of her supporters for dramatic reforms.

“How will the public perceive her after she had to make compromises with political players that are deeply disliked and mistrusted?” asked Michael Buehler, a lecturer in Southeast Asian politics at the University of London. “Can she remain the country’s moral authority now that she has to make politics?”

In some areas this may be easy, in others she will be up against vested interests willing to fight her.

Factory workers are her faithful followers, but she may find it more important to appease factory owners — who would be unhappy with aggressive pro-labor policies — in order to keep the economy humming.

Similarly, villagers uprooted by mining and infrastructure projects want justice that has been in short supply under the present, military-backed government. Meeting their desires could be off-putting to foreign investors. Cracking down on the pervasive problem of land-grabbing would also earn her powerful enemies.

Suu Kyi faces another dilemma in dealing with the country’s deep and long-running ethnic fractures. More than a dozen ethnic minorities for decades have fielded guerrilla armies in on-again, off-again insurgencies to try to win greater autonomy.

In opposition, Suu Kyi’s party could count on many of these groups as allies, partly on the basis of the concept that “my enemy’s enemy is my friend.”

Now, these groups will be looking to cash in their chips for sticking with her. But the army has long justified its iron rule on the basis of maintaining national unity, which in practice means maintaining the dominance of the ethnic Burman majority.

Another challenge is dealing with racial and religious strife involving the country’s ethnic Rohingya minority and other Muslims. Communal violence over the past several years has left hundreds dead and as many as 140,000 people homeless.

The efforts of radical nationalist Buddhist monks to paint Suu Kyi as soft in defending the religion of about 90 percent of the nation’s population failed to have much of an effect on the election results. For its part, the NLD did little to stand up for the rights of Burma’s Muslims, and the issue remains a flash point domestically and a sore point with foreign friends such as the United States.

“Many people in Burma will look forward to her making massive changes for the benefit of the people, and fulfilling the hope and promise that her party and her aura represent,” Jane Ferguson, an anthropologist at Australian National University in Canberra, said in an e-mail interview.

For some people, however, Suu Kyi’s halo began to slip several years ago, she added.

“Many pro-NLD supporters were disillusioned by her behavior after her release and when she became an MP. She accepted gifts from famous cronies, and ended up siding with the government and foreign business interests in regard to an investigation regarding land grabs,” Ferguson said.

“But, given the choice between the military party or the NLD, many skeptics cannot help but get caught up in the euphoria of the NLD’s victories,” said Ferguson. “It’s just a matter of time to see how this plays out.”