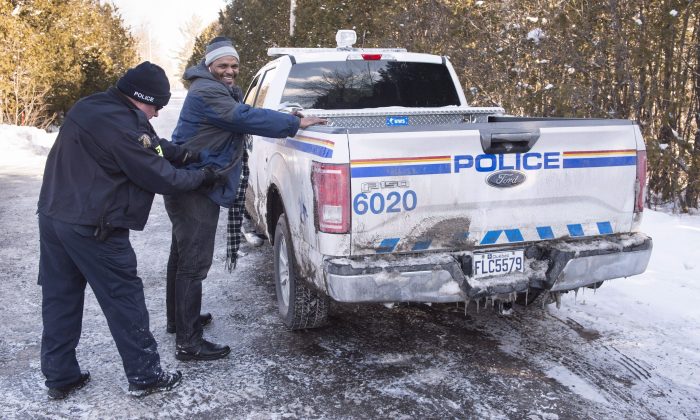 A Somali man is frisked by an RCMP officer after crossing the border into Canada near Hemmingford, Que., on Feb. 17, 2017. (The Canadian Press/Paul Chiasson)
Canada

OTTAWA—The number of people stopped by the RCMP after illegally entering Canada rose in March.

New figures released this week by the federal government show the RCMP intercepted 887 people crossing between official border points, up from 658 in February and 315 in January.

Of those stopped in March, 644 were picked up in Quebec, 170 in Manitoba, and 71 in B.C., with lone crossers nabbed in Alberta, and New Brunswick.

While none were picked up in Saskatchewan in the first three months of the year, on April 19 the RCMP said they charged a woman with human smuggling after intercepting nine refugee claimants crossing the border into that province from the United States on April 14.

Some of those coming to Canada in spots like Emerson, Man., have told authorities they were motivated to leave the United States because of the new administration, fearful their asylum claims won’t be treated fairly or that general anti-immigrant sentiment was rising.

Others have been found to have had Canada in their sights all along as their final destination, obtaining U.S. visas solely for the purpose of coming here.

All of this is under review, said a spokesman for Public Safety Minister Ralph Goodale.

“In co-operation with our partners, the government of Canada is constantly analyzing these trends and planning for possible developments,” said Scott Bardsley in an email.

Our government sitting on their hands and not dealing with the issue is only going to make the situation worse.
— NDP Immigration Critic Jenny Kwan

“Canadian authorities are managing the increase in asylum seekers in a sound and measured way, applying our laws and procedures to keep Canadians safe, while fully respecting all of this country’s international obligations.”

It will be some time before it’s known whether those who’ve entered Canada between border points in recent months are in fact granted asylum. If their claims are founded, they won’t face charges for illegally entering the country.

The figures also show a general overall increase in asylum claims in Canada, with 3,440 processed in March compared with 2,885 in February.

NDP Immigration Critic Jenny Kwan said the government needs to find a way to address what’s clearly a growing problem by both helping the Immigration and Refugee Board deal with the increased case load and rethinking the Safe Third Country agreement with the United States that’s pushing folks to cross between regular border entry points.

The deal states that people can’t make refugee claims at the Canada-U.S. land border crossing points because they should have been able to lodge one in the country they’re coming from. But dozens of academics, lawyers, and refugee rights advocates have called for Canada to suspend the deal given the current uncertainty in the U.S. immigration system.

“Our government sitting on their hands and not dealing with the issue is only going to make the situation worse,” Kwan said.

She is hoping the House of Commons immigration committee will agree to a study of the issue when Parliament returns from its break in May.