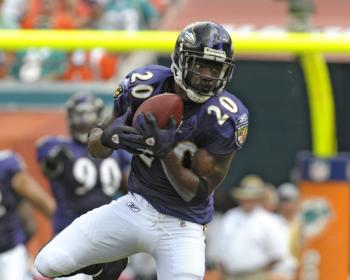 The saying goes “offense wins games but defense wins championships.” The Baltimore Ravens defense led its team one step closer to a championship with a dominating win over the AFC East champion Miami Dolphins on Sunday in Miami.

After making an improbable playoff appearance a year removed from a 1–15 season, the Dolphins (11–6) went one and done in the post-season following a 27–9 loss to Ravens (12–5).

Baltimore has the league’s second best defense and was number one in takeaways during the regular season. Miami was tied with the New York Giants for the fewest turnovers, setting an NFL record with only 13 during the 16-game regular season.

Protecting the "rock" was much of the reason for Miami’s great success this year as it was for the previous record holders, the 1990 Super Bowl Champion Giants, who only had 14 and were (not coincidentally) coached by Dolphins first-year Executive Vice President of Football Operations Bill Parcells.

Dolphins quarterback, and comeback player of the year, Chad Pennington took care of the football all season long throwing only seven interceptions, but he uncharacteristically threw four to the Ravens defense on Sunday.

The first interception was by safety Jim Leonhard in the second quarter.

Safety Ed Reed had two picks and did what he does best when he causes a turnover—returning the first one for a 57-yard touchdown, giving Baltimore a 10–3 lead late in the second quarter.

When talking about his over the shoulder interception Reed described the play "like playing center field."

As for the 57-yard return Reed said "It felt like the 200 in track. I don't think I caught my breath until the third quarter."

Pennington had eight straight completions and was driving the Dolphins in for a much-needed score before Reed spoiled that and their hopes at a comeback win.

The fumble occurred on the Miami 25-yard line and Suggs recovered it on the 19-yard line setting up his offense in the red-zone. Running back Leron McClain’s 8-yard touchdown scamper would extend Baltimore’s lead to 20–3.

McClain led his team in rushing with 75 yards on 19 carries. Willis McGahee rushed for 62 yards on just 7 carries.

Baltimore didn’t have trouble stopping the run, holding the Dolphins to 52 yards on the ground, and were well prepared for the Dolphins wildcat formation as it gained just seven yards on two plays.

Down 20–3, Miami began to fight back after a 45-yard catch and run by wide receiver Davone Bess which set up a nice one-handed catch by running back Ronnie Brown for a two-yard touchdown.

The extra point was botched, and the Ravens would extend their lead in the fourth quarter to 27–9 when rookie QB Joe Flacco ran for a 5-yard touchdown.

Flacco did not have a spectacular day but he didn’t turn the ball over and managed the game completing just 9 of 23 for 135 yards with no touchdowns, but more importantly, no interceptions.

The Ravens will now travel to Nashville to face the number one seed Tennessee Titans this Saturday for what should be a defensive struggle as it features two of the league’s best defenses.

With starting running back LaDainian Tomlinson limited due to a groin injury, the short (5 feet 6 inches) but speedy Darren Sproles carried his team with 328 all-purpose yards and the 22-yard game-winning touchdown run.

The Chargers (9–8) were just 4–8 five weeks ago and counted out of the playoffs by most, but rattled off four straight wins to end the season winning the AFC West and a playoff berth.

Now they must travel to Pittsburgh to face the Steelers (12–4) and the league’s best defense this Sunday.