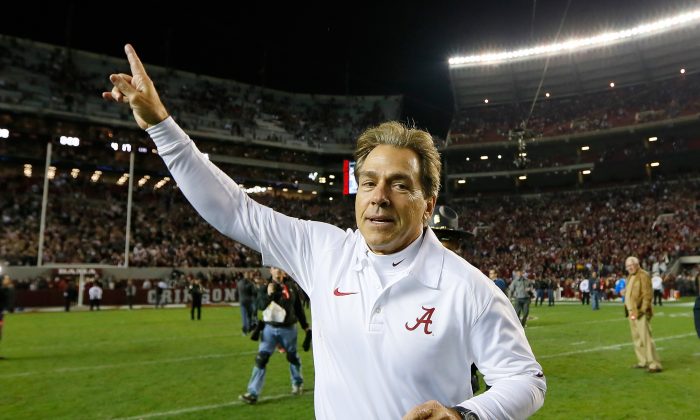 Dabo Swinney, who has 13–0 Clemson in the playoffs, was recently named the AP’s Coach of the Year.

Yet, while Swinney was very deserving of the award, typically these coaching awards are based on how much improvement a team shows from the previous season—not who’s actually the best in the business—though Swinney is still up there when it comes to that discussion.

It’s like when Charles Barkley won MVP over Michael Jordan in 1993. Everyone knew that Jordan was the game’s best player, but sometimes he was the victim of his own success.

In any case, here are the game’s 10 best college football coaches. (Retiring coaches like Steve Spurrier and Frank Beamer won’t be considered.)

Although he greatly benefited from the job Jim Harbaugh did before him, Shaw, with a 53–14 record in five years with the Cardinal, has officially stepped out of Harbaugh’s shadow. Stanford is 11–2 this year and won its third conference title under Shaw.

Any questions about how well Patterson’s Horned Frogs would do in a bigger conference—the Big 12—have been answered in the last two seasons with a 12–1 mark last year and a 10–2 record this season. Patterson, who has been with TCU for 16 seasons, has gone 142–47 while taking his team to both the Rose and Fiesta Bowls.

It took Briles just six seasons to transform the once-woeful Bears program from annual doormat to conference champion. Now eight seasons into his tenure, Briles has a pair of Big 12 titles while putting up a 64–37 mark.

Swinney won his second conference title this season after the Tigers ran the table in ACC play before defeating North Carolina in the conference title game. With 13 wins in the books already, Swinney has nailed down his fifth straight 10-plus win season this year and has a 74–26 overall record at the school.

Fisher has brought the Seminoles back to being the major power they were during the heyday of former coach Bobby Bowden’s tenure. The former Bowden assistant has led them to a 68–13 mark in six seasons with a national championship to boot.

“Big Game” Bob’s reputation had taken a hit in recent years as the Sooners haven’t played for a national championship since losing to Urban Meyer’s Gators following the 2008 season—a drought for such a proud program. But Stoops—who is 179–45 at the school—won another Big 12 title this year (his 9th in 17 seasons) and has his team in position for its second national title under his watch.

With 12 wins this season, Dantonio now has five 11-win seasons in his nine years with the Spartans. Before his arrival, the program—which plays second fiddle in its own state to the Wolverines—had zero. In addition, of the nine Big Ten titles Michigan State has won (dating back to the early 1900s) three have come under Dantonio’s watch—all in the last six seasons. Overall, in nine years with Michigan State, Dantonio has an 87–32 record while putting the team on the national scene for the first time in decades.

Harbaugh may have only five years under his belt as a major college head coach, but they’ve been an impressive five. The former NFL quarterback and head coach first took Stanford from annual cellar-dweller to Pac-10 power, even surpassing incumbent powerhouse USC, in just four years with the Cardinal going 29–21. After taking over at Michigan this year, he’s guided the Wolverines to a 9–3 record—the team’s second-best season since Lloyd Carr retired after the 2007 season.

Meyer has coached four teams (Bowling Green, Utah, Florida, and Ohio State) and has won at every stop. A 17–6 two-year mark with the Falcons was followed by a 22–2 stint with Utah, a 65–15 record with Florida (including two national titles), and now an almost unfathomable 49–4 record with the defending champion Buckeyes. That’s three national titles while accumulating a 153–27 record overall in 14 season as head coach. Only one current coach has a more impressive résumé.

Saban’s lead over Meyer was shortened considerably last year when Ohio State took down Saban’s Crimson Tide in the playoffs en route to winning the title. Still, Saban has his team back in the playoffs this season—the only school to make it both years—and leads Meyer in national championships 4–3, thanks to his winning three titles in a four-year span from 2009 to 2012. Overall, Saban is 194–60–1 in four stops with Toledo (9–2), Michigan State (34–24–1), LSU (48–16, plus a national title), and now at Alabama (103–18).