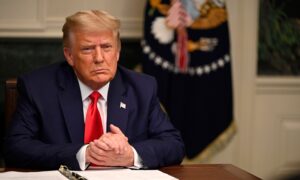 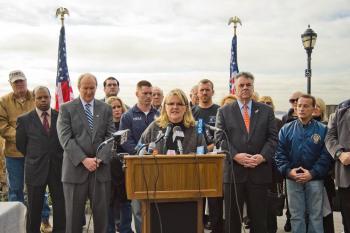 Members of the 9/11 Never Forget Coalition announce a rally that will be held on Dec. 5 to protest the trial of 9/11 conspirators in U.S Federal court in Manhattan. At the microphone is Debra Burlingame, founder of 911 Families for a Safe and Strong America, to her right is Rep. Pete King (R- NY) and (L) is former Assistant U.S Attorney for Southern NY Andrew C. McCarthy. (Aloysio Santos/The Epoch Times)
US

Rally Against Terrorist Trial in NYC

By tim.mcdevitt
Print
NEW YORK—A rally to protest the upcoming trial of 9/11 conspirators in New York City was announced in Battery Park on Tuesday morning by members of the 9/11 Never Forget Coalition. The decision to hold the trial of Khalid Sheikh Mohammed and four other co-conspirators in New York City was announced by President Barack Obama and United States Attorney General Eric Holder earlier this month.

The coalition will hold the rally at noon on Dec. 5 in Foley Square with members of the 9/11 Never Forget Coalition, 9/11 victims, family members, first responders, members of the military, and veterans.

Debra Burlingame, founder of the 911 Families for a Safe and Strong America said, “Our Rally on Dec. 5 will tell Attorney General Eric Holder, President Barack Obama, and their supporters in Congress: We will fight you all the way!” Ms. Burlingame is the sister of Charles F. Burlingame III, pilot of American Airlines flight 77, which crashed into the Pentagon on Sept. 11, 2001.

The group sent a letter two weeks ago signed by 300 family members of 9/11 victims to President Obama, AG Holder and Defense Secretary Robert Gates asking them to reverse their decision to hold the trial in New York. The letter has since been signed by 120,000 Americans and is posted online at www.keepamericasafe.com/?page_id=1822

The group is protesting the plan to hold the trial that will give enemy combatants of the U.S. constitutional protections by holding the trial in U.S federal court.

Speakers at the press conference included Rep. Pete King (R- NY) Peter Regen, an active FDNY firefighter who has served two tours in Iraq and whose father, Donald J. Regen, died at the World Trade Center, and Andrew McCarthy, former assistant United States attorney for the Southern District of New York and prosecutor in the trial of the 1993 World Trade Center bombing.

Members of the group Human Rights First also appeared at the press conference Tuesday morning. They claim that the 9/11 Never Forget Coalition is “fear mongering” and should allow the trial move forward.

“Those opposed to federal court trials for these men have speculated about a lot of things—our safety, procedural problems, time. I don’t want speculation. I want results. Since the 9/11 attacks, the only forum that has given victims families results in the war on terror is our federal courts,” Stated Lorie Van Auken, a 9/11 widow in a press release.

According to Human Rights First, a recent study states that of 119 terrorism cases with 289 defendants filed since 2001 in the normal federal court system, 214 of the cases have been resolved as of June 2, 2009, with 195 convictions either by verdict or by a guilty plea. By contrast, military commissions have secured three convictions.