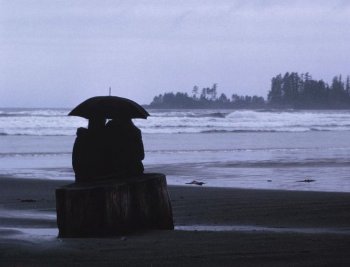 By Joan Delaney
Print
Serious water shortages in many regions of the country mean it's time for Canada to take a hard look at rainwater harvesting, says a water advocate.

The recent news that most of British Columbia’s snowpacks have declined this year to the lowest on record should serve as a wake-up call, says Susanne Porter-Bopp, community water coordinator with the POLIS Project at the University of Victoria.

“I’m hoping that this is going to be one of those summers that really gets people thinking about water,” she says. “This might just be the push that we need to finally get some action on these more innovative water-conservation tools and strategies.”

Rainwater harvesting is the age-old practice of capturing rainwater runoff from roofs and storing it for future use. The practice is still used in many parts of the world, particularly in the global south, as the main source for drinking, bathing, crop irrigation, and livestock.

Fifty years ago, rain barrels and cisterns were common outside Canadian homes. But this fell out of favour with the advent of cheap irrigation systems and the easy availability of potable water—high-quality treated municipal drinking water.

Much of the time, people don't even need to use potable water, Porter-Bopp says.

“Even if we changed the regulations and made them more clear so as to allow things like rainwater and grey water into our homes for non-potable use like in toilets and laundry machines, that would have a huge affect on easing up on how much we pull from the municipal systems.”

There are several barriers to this, such as cost, liability concerns, and the lack of clear policy on rainwater harvesting. However, Ontario already permits rainwater and grey water reuse in the provincial building code, while Nova Scotia, Saskatchewan, and B.C. are planning to do likewise.

“People working on water issues in B.C. were really excited to see that,” says Porter-Bopp. “That means that there’s an appetite for it.”

Grey water is wastewater generated from domestic activities such as laundry, dishwashing, and bathing which can be recycled onsite for other uses.

In Calgary, most city-owned golf courses and many parks are now using rain and river water rather than potable water. In recent years, Alberta has been plagued by drought conditions, especially in rural areas. As in B.C., declining snowpack levels could force water restrictions this summer.

In many homes in rural areas, rainwater harvesting systems are being installed when traditional sources are not available or are seen as too expensive. On the Gulf Islands it’s common for people to plumb their houses with different sources of water.

Bob Burgess of Rainwater Connections, a company based on Thetis Island that specializes in designing and building rainwater systems, says provided it is collected, stored, and disinfected correctly, rainwater is entirely safe to drink.

Rainwater collection and storage can be as simple as capturing rain in a barrel for outdoor use, he says, or complex enough to necessitate the expertise of an architect, engineer, rainwater specialist, and a filtration and water treatment specialist.

When rainwater is used inside the home, more attention to collection techniques is necessary such as installing debris catchment devices and gravity filters.

“If it’s tank water, you do get more of an odour and colour from the water so it’s nice not to have that. Even for toilets you don’t really want smelly, discoloured water, and certainly not in the washing machine,” Burgess says.

Even with rainwater stored for gardening use, to prevent algae growth it’s advisable to reduce the amount of debris such as leaves and pine needles that can find their way into the storage tank, he adds.

“Almost all our uses of water in our homes and our daily lives are actually non-potable in the sense that they're not drinking-water quality,” notes Porter-Bopp.

Burgess estimates that the U.S. has more than 500,000 rainwater users, with a thriving rainwater collection industry in Texas, Hawaii, Arizona, California, Washington, and Oregon.

Rainwater harvesting is also popular in parts of Europe and Japan, and mandatory in Bermuda and in parts of Australia and New Zealand. In South Australia, every new home must be plumbed with a rainwater tank for toilets, laundry, and outdoor irrigation.

Canadians are among the most voracious water users on the planet, second only to our neighbours to the south. One of the reasons for that may be that our water comes relatively cheap compared to most other countries.

Water shortages during the summer are becoming increasingly common across the country, a striking example being the 2006 scarcity in Tofino, a town on the west coast of Vancouver Island located in a temperate rainforest.

“That to me epitomizes how wrongly we’re managing our water,” says Porter-Bott. “That could have been easily mitigated by the use of alternative sources such as rainwater, etc.”

She believes rainwater harvesting is a permanent solution to water shortages as it decentralizes the water supply and encourages personal responsibility, leading to conservation of this finite resource.

“I think we just need to sit down and look to countries like Australia which has very progressive regulations regarding rainwater. That’s what we need to do here, because we have the capacity, especially in our little wet corner of the world. We have a wonderful resource to be able to harness.”