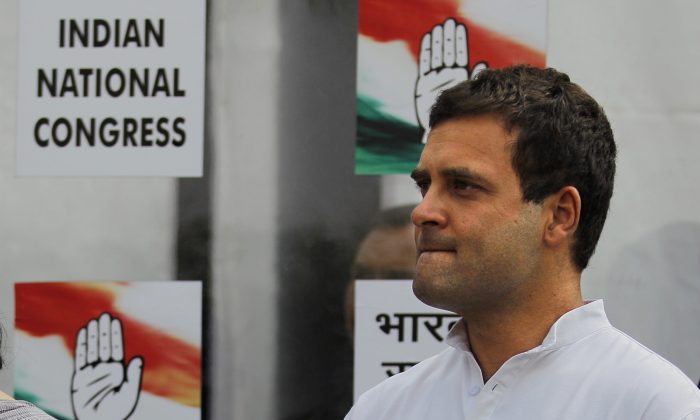 Rahul Gandhi, Girlfriend Not Ready to Get Married Yet

Rahul Gandhi is not ready to marry his girlfriend, if the two are even still together.

Gandhi revealed a decade ago that his girlfriend, Veronique, was Spanish and lived in Venezuela.

They had met at university in England.

He said that Veronique’s family were Spanish but had been living in Venezuela for a long time.

But he has not mentioned her since and he may be dating Noella, an Afghan princess and jewelry designer.

In any case, he recently told PTI that he will only marry when he finds “the right girl,” seemingly meaning that neither Veronique nor Noella fit the bill.

“This is a question that comes up all the time. Right now, I am engaged in fighting the [Lok Sabha] elections. Unfortunately, I have not been focused on private life,” he said.

“Is it two years from now, one year from now?” he was asked.

“When I find the right girl,” replied the 43-year-old Congress vice-president.

“That means you have not found the right girl?”

“When I find the right girl, I will get married.”

See an update on the India elections below via the Associated Press.

NEW DELHI—The family that has dominated Indian politics for most of the country’s post-colonial history has just been snubbed by voters like never before.

In a campaign led by Rahul Gandhi — the son, grandson, and great-grandson of Indian prime ministers — the Indian National Congress party suffered the most crushing defeat in its 128-year history Friday as the results of India’s general election were released.

The next prime minister will be Narendra Modi, who led the opposition Bharatiya Janata Party to a solid victory, in part by seizing on the perception that Rahul Gandhi was little more than a crown prince awaiting his prize. Voters were furious over Congress’ inability to address corruption, unemployment and the sputtering economy.

“We are accepting the people’s verdict in all humility,” Congress party spokesman Shakil Ahmed told The Associated Press. “Trends of the counting are certainly not in our favor. The trends point out that the country has decided to vote against us.”

The electoral drubbing is a massive comedown for the Gandhi family and a shift in India’s tradition-bound society.

The family patriarch was Jawaharlal Nehru, a hero of the struggle for independence from British rule who became India’s first prime minister, leading the country from 1947 until his death in 1964.

Nehru’s daughter, Indira Gandhi, later took power, followed by her son Rajiv. Both were killed in political assassinations. Rajiv’s Italian-born widow, Sonia, then took over the Congress party, becoming India’s most powerful politician and setting the stage for her son, Rahul, to eventually take up the family mantle.

The family is not related to Mohandas Gandhi, India’s independence leader who was also a senior member of Congress.

Rahul Gandhi, the dimpled, 43-year-old family scion, had been presented to voters as a youthful leader who could rejuvenate India’s faltering economy, but many saw him as privileged, aloof and out of touch with everyday Indians.

Congress, in power since India’s independence for all but 10 years, never even formally declared Gandhias its candidate for prime minister, political maneuvering aimed at protecting him from being scapegoated if the party — and the family — were to be voted out.

During the punishing election campaign, Modi seized on the charges of nepotism aimed at Congress, at one point telling a crowd of supporters: “No one can save this mother-son government now.”

In a decade in the Indian parliament, Rahul rarely spoke or raised questions, and failed to spend funds allotted for the development of his constituency. In recent state elections in Bihar and Uttar Pradesh states, where Gandhi led the Congress party’s campaigns, the party fared dismally.

“Rahul is seen as being well-meaning and harmless. But he is devoid of ideas, or a grand vision for what he wants to do for the country,” said Sumit Chakravartty, a political analyst and editor of Mainstream weekly. “He’s a poor communicator. When he does speak, what emerges is further evidence of his fuzzy thinking.”

Congress has had other problems as well.

Political analysts say Congress’ decline has been evident for years, particularly as the economy slumped and a succession of corruption scandals came out. But some also consider the party’s dependence on one family to be a liability.

“India is the world’s largest republican democracy and it’s weird to have it ruled by a succession of increasingly inept dynasts,” said Mukul Kesavan, a historian at the Jamia Millia Islamia university in New Delhi.

“This isn’t just bad for the party, it’s bad for the country because it leaves India without a functional pan-Indian party of the center,” Kesavan said.

Even in the Amethi constituency, considered a Gandhi stronghold, loyalties were wavering during the campaign.

“People say Modi has done wonders in Gujarat,” said 33-year-old Ramesh Yadav, referring to the state where Modi has been chief minister for a decade. “There are no industries here. Rahul made many promises when he won last time, but where are the factories he promised?”

During his campaign, Rahul Gandhi has tried to whip up some fire into his speeches, but the crowds appeared far from impressed. In many ways, he was overshadowed by his sister, Priyanka Gandhi Vadra, a stay-at-home mother who addressed party workers and public rallies with ease and a comfort level that many have compared to that of her grandmother, Indira.

The last time the family faced such a serious challenge was in the 1980s, when then-Prime Minister Rajiv Gandhi’s government lost the 1989 elections, mainly due to charges that Swedish gun manufacturer Bofors AB paid bribes to supply Howitzer field guns to the Indian army.

Despite the Gandhi family’s waning popularity, it is premature to count them out entirely. The family, which has been likened to India’s version of the British monarchy or America’s Kennedy dynasty, is a subject of fascination in India. And the Gandhis’ message of lifting the country’s impoverished masses resonates deeply with many.

“The Congress party is not going to disappear. The party has the vitality to reinvent itself. This could be a temporary setback,” said Inder Malhotra, a journalist and author best known for his biography of IndiraGandhi.

Still, he said, the party appears incapable of looking beyond the Gandhi family for leadership.