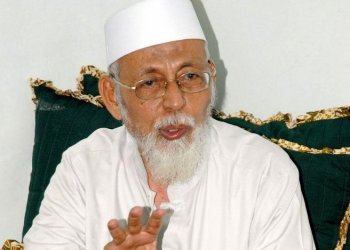 The preacher was arrested in the early morning in the district of Banjar, West Java by Indonesia's anti-terrorism unit, Special Detachment 88—named after the 88 Australians that died in the deadly Bali bombings in 2002.

Bashir had just finished attending a religious meeting in Tasik when the arrest took place. Five of his bodyguards, who had attempted to obstruct the arrest, were also taken by police, reported local media.

"The United States is behind this! This arrest is a blessing. … I will be rewarded by Allah!" the old man shouted arriving at the police station, said media reports.

Bashir has been funding the training of Islamic terrorist groups in Aceh, on the island of Sumatra, according to head of Indonesian Police Public Relations Division, Inspector General Edward Aritonang.

“He knew all the training networks and planning going on in Aceh because he gets routine reports from the field commanders,” Aritonang said at a press conference in Jakarta. “Bashir also funded military activity in Aceh,” he said.

Intelligence agencies and the United Nations have identified Bashir as one of the cofounders of Jemaah Islamiyah, responsible for the 2002 bombings in Bali that left over 200 dead, mostly foreigners. He was found guilty of conspiracy and sentenced to two years, but his conviction was overturned and he was freed in 2006. Bashir has denied all accusations.

In recent months, Indonesia's anti-terrorism unit has carried out several arrests and raids in Western Java. In two of the raids explosives, detonators, ammunition, and liquid chemicals were found. Indonesian authorities have been considered increasingly successful in suppressing Islamic extremists.