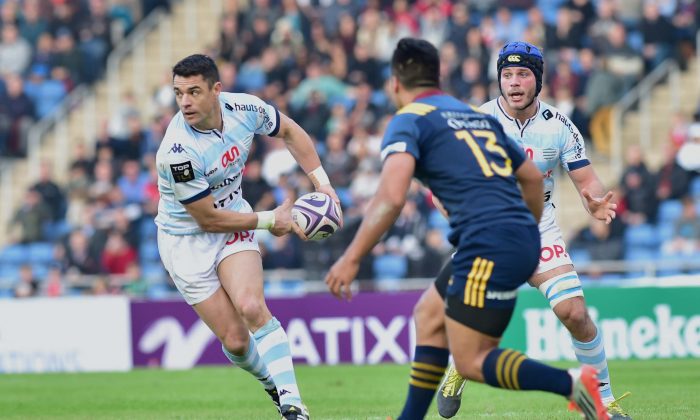 HONG KONG—The Natixis Rugby Cup which took place last Saturday Feb 6 at Siu Sai Wan stadium attracted over 6,000 spectators to watch a game of fast moving Rugby between two top Rugby sides. Racing 92 currently head of the French 14 League have played in each match since the Natixis Rugby Cup was introduction in 2013. This year their opponents were Highlanders from Wellington New Zealand, the defending champions of the Super Rugby Cup.

Highlanders opened the scoring in the 9th minute with a penalty try following a scrummage error by Racing 92 close to their try line but scrum-half Xavier Chauveau scored just a few minutes later converted by All Blacks’ star Dan Carter to level the score at 7-7. This was Carters only score as he was subbed at half time by former All Black Joseveta Rokocoko. Lock, Francois van der Merwe, Racing’s captain of the day pushed through to move Racing into a 12-7 lead.

Towards half time, Matt Faddes playing at fullback for Highlanders as stand-in for absent All Black’s Ben Smith, scored twice, both converted by Lima Sopoaga to take the New Zealanders into a 12-21 lead at break.

Highlanders scored immediately after the start of the second half through No12 Richard Buckman (26-12) but it was Racing 92 that were to dominate the second half. Racing played some superb running rugby; a strong pack got possession and then fast elusive running, quick hands and some deft kicks-ahead picked up by the quick half back line to gain territory or to score. They quickly made up the deficit and forged ahead.

Racing scored in the 44th minute running the ball from the half way line for Davit Khinchagishvili to score but the conversion was missed (17-26). A good place kick again took Racing to the opponent’s 5 yard line and a push over try for Xavier Chauveau converted by Dambielle put them close at 24-26. Four minutes later Racing kicked a long high ball to the Highlanders corner flag, the defender missed the bounce, it was collected by Racing No 11 Marc Andreu for a try converted by Benjamin Dambielle (31-26).

On 56 minutes good work by Matt Faddes and fly-half Lima Sopoaga (named Puressential Man of the Match) led to a Liam Squire try for Highlanders to level the score at 31-31.

After several phases of play Racing won a scrum on half way, moved the ball up-field then a long kick settled beyond the try line and Racing’s Joannes Goosen was first to the ball to touch down, converted by Dambielle (38-31). At this point it was Racing 92 at their best dominating play.

But in the 70th minute, Highlanders pressured the Racing line and finally broke through with a try by Tei Walden and with the conversion by Marty Banks levelled the score at 38-38.

Highlanders created a good chance on 73 minutes with a kick ahead but the ball bounced awkwardly and was mishandled by the Highlanders player. Racing won the ball from the scrum kicked for touch, won the lineout and pushed over with a rolling maul for No.8 Chris Masoe to score (43-38), Dambielle added the extra points for 45-38.

Highlanders hit back again to the French line in the last minutes of the match but an error gave Racing 92 a penalty to end of the match – with the Cup retained by Racing 92.

This was certainly the best Natixis Cup played in Hong Kong. The event organized by SL-Events (France) and the HKRFU is growing into a major annual spectacle and the rivalry between the northern and southern teams from different leagues gave it the edge.