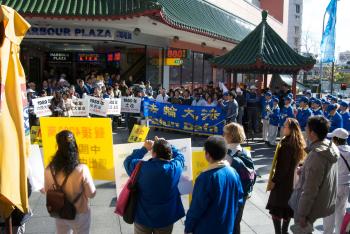 A rally in Sydney to celebrate the millions of people withdrawing from the Chinese Communist Party (CCP). (The Epoch Times)
US

Democracy activists, Falun Gong practitioners, labour rights advocates, members of the Taiwanese community, Chinese Australians and concerned citizens took to the streets in Sydney on Sunday July 27 to acknowledge the resignation of over 40 million people from the Chinese Communist Party (CCP).

The rally was organised by the Quit the CCP Movement, a campaign that aims to educate Chinese people about the true nature of the CCP and its crimes against Chinese people.

At Quit the CCP centres and booths around Australia and the world, photos and information is distributed of historical events that have been omitted from school textbooks and kept from Chinese people through the CCP’s rigorous control of information in China.

Included among these are events such as the Tiananmen Square massacre in 1989, the destruction of temples during the Cultural Revolution, peasant riots during the land reform and the continuing persecution of Falun Gong practitioners and human rights activists in China.

Quit the CCP centres offer the facility to withdraw from the CCP and since their inception in November 2004 the number of resignations has risen to over 40 million.

Co-ordinator of Quit the CCP in Australia Herbert Lu, who also spoke at the rally, said the Chinese Communist Party was “just a criminal group”.

“If you quit the CCP, you are free – your heart and mind – because they can’t control you anymore,” he said. “So for you and your family, it is good to quit the CCP.”

Other speakers at the rally, which began in Sydney’s Hyde Park and wound through the streets to China Town, included a representative from the Chinese Labor party, Mr Yuang Fang, China scholar, Ms Hong Xin Chen and Mr Steve Ran from the Taiwanese community.