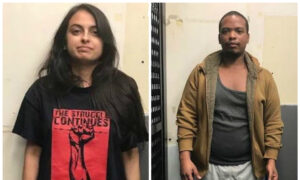 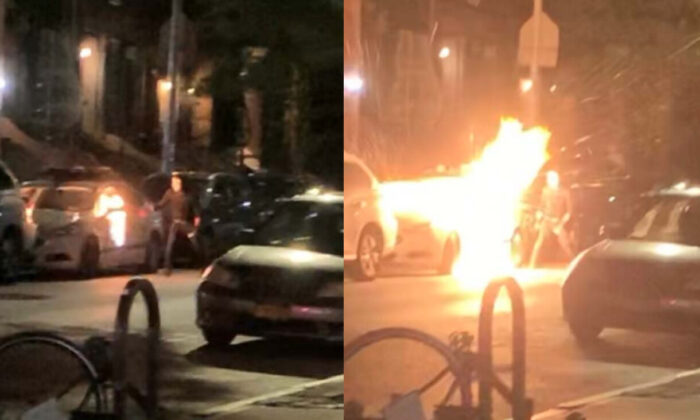 An NYPD vehicle is lit on fire on West 83rd Street toward Central Park, New York, in the early hours of July 29, 2020. (U.S. District Court Eastern District of New York)
Crime and Incidents

A Queens man has been arrested and charged with intentionally setting fire to a marked New York City Police Department van, the U.S. Attorney’s Office for the Eastern District of New York announced on Friday.

Sam Resto, 29, was arrested on Thursday and made his first appearance in court on Friday afternoon. A criminal complaint against Resto was unsealed in federal court in Brooklyn on Friday charging Resto with arson, which is punishable by imprisonment for up to 20 years.

“As alleged, Resto, wearing a mask and gloves and carrying a backpack containing the tools of his destructive trade, intentionally set fire to an NYPD van parked on a city street lined with residential buildings and vehicles,” acting United States Attorney for the Eastern District of New York Seth DuCharme said in a statement. “This office will vigorously prosecute criminals whose actions endanger the community, police officers, and first responders.”

The criminal complaint (pdf) stated that in the early hours of July 29, Resto was allegedly captured on video setting fire to an unoccupied marked NYPD van parked on West 83rd Street near Columbus Avenue in Manhattan. He allegedly smashed the window of the van and poured gasoline inside the vehicle before setting it on fire and running away toward Central Park.

The NYPD later recovered a backpack from Central Park that allegedly belonged to Resto. Inside, they found clothes similar to items that Resto was seen wearing earlier in the morning, a Guy Fawkes mask, a red jerry can that smelled like gasoline, a hammer, and lighters.

The criminal complaint also noted that Resto was allegedly seen on surveillance video on July 28 at a gas station in Elmhurst, New York, carrying a red jerry can that he had filled with gasoline using a self-service pump.

The complaint also stated that law enforcement officers obtained cellular tower data for a phone allegedly associated with Resto, which showed that his phone was near the NYPD vehicle in the early hours of July 29 around the time he had set the vehicle on fire.

“Preliminary analysis of cellular tower data also showed that, approximately 5 minutes later, Resto’s telephone was in close proximity to the location in Central Park where the backpack was recovered,” the complaint read.

FBI Assistant Director-in-Charge William Sweeney said in a statement on Friday that Resto’s actions “not only destroyed essential public safety equipment paid for by the people of New York City” but also put the “personal safety of those living in the neighborhood and their private property into harm’s way.”

“Deliberate criminal activity like the type alleged today puts both first responders and private citizens at risk, it is an affront to everything this city is supposed to be about,” Sweeney said. “Today’s federal charges are the community’s message back to Mr. Resto and others who may choose to engage in this type of criminal behavior—we will not tolerate crimes of this magnitude and the consequences will be significant.”

“I thank our NYPD detectives, the U.S. Attorney for the Eastern District of New York, and all of our law enforcement partners for their tireless work in ensuring our common mission of protecting life and public safety,” he said.