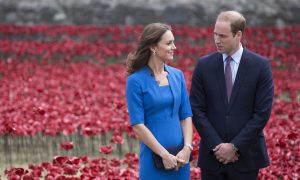 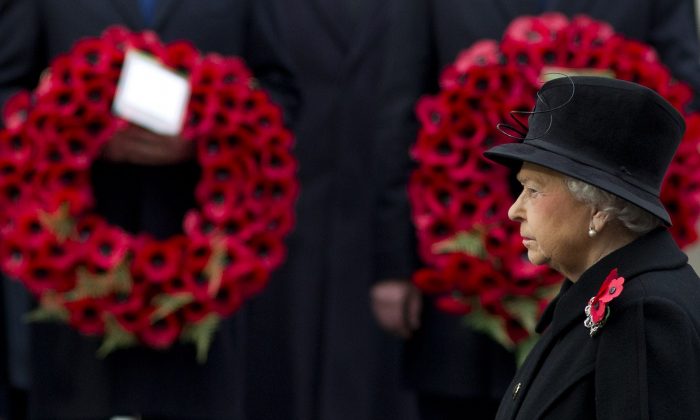 Britain's Queen Elizabeth II leads the Remembrance Sunday ceremony at the Cenotaph on Whitehall, London, on November 9, 2014. Services are held annually across Commonwealth countries during Remembrance Day to commemorate servicemen and women who have fallen in the line of duty since World War I. (AFP/Getty Images)
Europe

Four Islamic terrorists planned to kill the Queen of England before their sinister designs were foiled, according to a new report.

The queen was due to attend the Royal British Legion Festival military event at Royal Albert Hall, where the four suspects planned to stab the 88-year-old.

The event was slated for Friday night as part of the lead up to Remembrance Sunday.

But the attack was foiled when police officers arrested all four suspects in separate raids, according to The Sun newspaper.

The suspects range in age from 19 to 27 years old. They were held on suspicion of violating the Terrorism Act 2000 and were taken to police stations in central London. Although they were labeled as Islamic terrorists, it’s unclear if there’s any connection with the infamous ISIS terrorist group.

But the planned attack came after the Islamic State called on supporters to carry out attacks on high-profile targets around the world without need for central planning.

Following the arrests, the queen and Prime Minister David Cameron were informed of the threat.

The suspects planned to use knives as weapons but also had access to guns, The Sun said.

The first suspect was arrested in a home that he shared with his mother in Buckinghamshire, reported the Daily Mail. He recently returned from Pakistan.

Another suspect was seized by officers at a house in Hounslow a short time later.

The third suspect was stopped in his car in Southall, West London by armed police.

And the fourth man was arrested in Uxbridge.

Searches also took place in other areas though no other arrests were confirmed.

Only one suspect, Yousaf Syed, has been identified.

The 19-year-old’s home had been raided before during an investigation.

A Metropolitan Police spokesman said the men were being held on suspicion of “being concerned in the commission, preparation or instigation of acts of terrorism.”

Though the queen is thought to have been a target of the plot, she was still going to attend events for Remembrance Sunday, a source told The Sun.