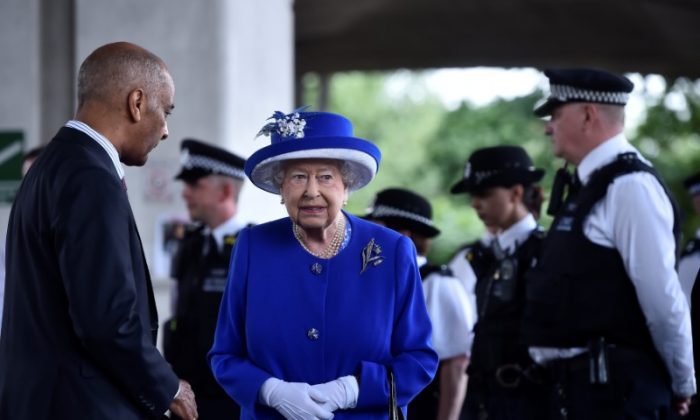 Britain's Queen Elizabeth meets police officers near the scene of the the fire that destroyed the Grenfell Tower block, in north Kensington, West London, Britain on June 16, 2017. (REUTERS/Hannah McKay)
UK

Queen Elizabeth Speaks to Parliament About Brexit, Grenfell, and Terrorism

Queen Elizabeth detailed the measures as such, “To support victims, my government will take forward measures to introduce an independent public advocate, who will act for bereaved families after a public disaster and support them at public inquests.”

The devastating fire that engulfed a 24-story apartment building tower left 79 dead and many more homeless. Surviving victims are still seeking help to get their lives together. The country is looking for answers about the cause and remedy for the highly flammable building cladding that helped the fire spread.

She also spoke about Britain seeking a favorable outcome in Brexit talks. But according to CNN, the queen’s choice of headgear had Twitter users wondering if she was sending the public a secret message. The hat resembled the European Union flag, same colors and all.

Snarky talk show hosts have gotten Prime Minister Theresa May to indirectly express disagreement with Brexit, and perhaps the British royal family, if questioned, could have a similar outlook. Multiple EU member states have also given the U.K. the option of rejoining before Brexit negotiations are concluded.

The queen also detailed a strategy to deal with attacks in light of the series of terrorist incidents that have rocked England. She suggested Britain put forth measures to limit future ones by re-examining current readiness as well as prison sentence length for terror offenses.