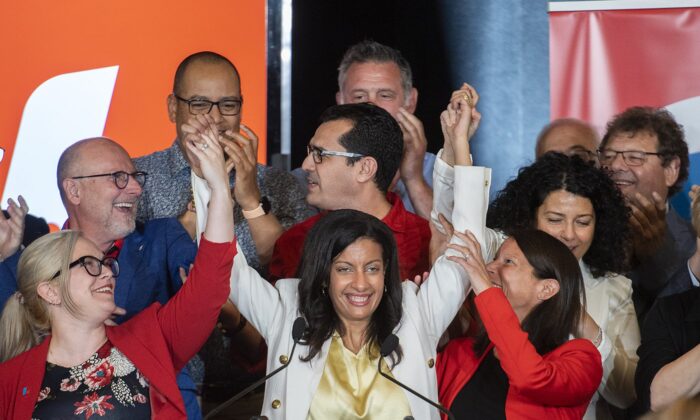 Quebec Liberals Promise Not to Preempt Court Challenges With Notwithstanding Clause

Quebec Liberal leader Dominique Anglade cast herself as a candidate who can unite Quebecers of all backgrounds as her party presented its election platform Saturday, nearly five months ahead of the October vote.

While addressing supporters in Montreal, Anglade promised to turn the page on what she described as nearly four years of divisive government led by Premier François Legault and his Coalition Avenir Québec.

The CAQ, she said, only sees its supporters as real Quebecers and views diversity as a weakness and not a strength.

“We’re all nationalists because we love Quebec, we love our nation,” she said. “We can be nationalists and federalists and that’s the Liberal Party.”

Speaking to reporters after her speech, Anglade accused the premier of deliberately dividing Quebecers as part of a strategy to distract residents from issues such as the rising cost of living.

“I think people are really noticing the level of arrogance and the level of division that this government is creating,” she said.

But while Quebecers are not scheduled to go to the polls until Oct. 3, Anglade said she’s confident her candidates will keep the platform in front of voters over the summer.

“We want to make sure that people have information when they’re going to be voting, we don’t want to have to tell people three days, or five days, seven days before the election what we’re standing for,” she said.

Anglade’s platform includes a promise not to use the notwithstanding clause proactively to protect bills from court challenges.

Legault’s government has preemptively used the notwithstanding clause to protect both a law banning certain public servants like police officers and teachers from wearing religious symbols, as well as its wide-ranging reform of the province’s language law.

The Liberals said they would not renew the invocation of the notwithstanding clause in the religious symbols ban when it expires in 2024 and would remove it from the language law.

“We are not in favour of the notwithstanding clause,” Anglade said. “Those bills have to go in front of the courts.”

The removal of the notwithstanding clause is one of several changes the Liberals are proposing to the language reform bill. They are also promising to ensure people are able to access health care in their language; fund health and education in accordance with “real needs” instead of based on language, and eliminate a requirement that new immigrants only communicate with the government in French after six months in the province.

The party would maintain a requirement, however, that students at Quebec’s English language junior colleges take three additional French-language classes.

The platform also includes a number of promises aimed at helping Quebecers deal with inflation and the rising cost of living.

The Liberal said they would cut income taxes for Quebecers who make less than $92,500 a year by 1.5 percent if elected — a $2 billion promise the party contended would save individual taxpayers up to $1,000 a year.

A Liberal government would increase taxes on people who make more than $300,000 a year.

The party is also promising to eliminate the provincial sales tax on products like shampoo, soap, toothpaste and electricity.

Recent polls have placed support for the Liberals below 20 percent, well behind the CAQ which has regularly polled above 40 percent.

The Liberals could also face new challenges from anglophone parties who say they feel betrayed by Anglade’s stance on the language reform law. A Liberal amendment to the bill, which was ultimately not adopted, would have barred anglophone junior college students from taking classes on the French language to meet the new language requirement and the party did not come out against the bill until days before the final vote.