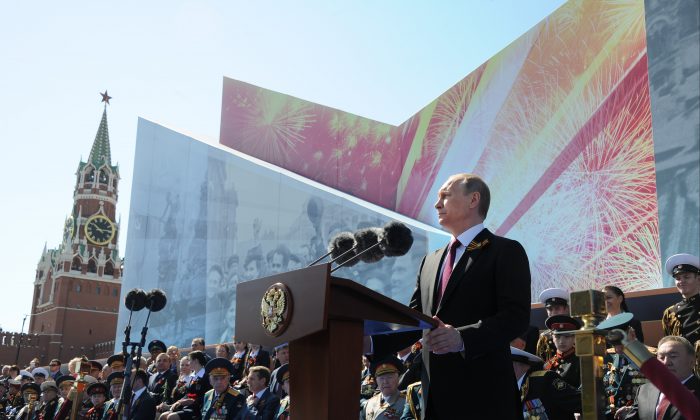 MOSCOW— Russia’s new weapons have proven their worth in Syria, helping turn the tide of the war, President Vladimir Putin said Tuesday.

Speaking at a meeting with military officials, Putin said that Russian warplanes have flown more than 10,000 combat missions since the air campaign began on Sept. 30. He said they struck more than 30,000 targets, including 200 oil facilities, allowing the Syrian military to drive militants from 500 towns and villages.

Russia has for the first time tested in combat its new air- and sea-launched cruise missiles to hit targets in Syria. Putin said the military performed a total of 115 launches of the long-range cruise missiles.

“The efficiency and high quality of Russian weapons have been clearly shown in Syria,” Putin said. “The strikes from the air and from the sea on the Islamic State and Jabhat al-Nusra terrorist groups have been precise and powerful. They have allowed us to achieve a turning point in the fight against the militants, although we realize that the situation there is difficult and there is still a lot for the Syrian army to do.”

The Russian military pulled out some of its warplanes from Syria in March but has continued to strike the Islamic State group and the al-Qaida-affiliated Nusra Front.

A Russian- and U.S.-brokered cease-fire that began on Feb. 27 has helped reduce hostilities, although fighting has continued in some areas. On Monday, U.S. Secretary of State John Kerry announced a new U.S.-Russia agreement to reinstate an enduring nationwide truce.

Putin on Tuesday voiced hope that a Russian-U.S. dialogue on Syria will help achieve positive results. “The most important thing is to create conditions for a political settlement in the country,” he said.