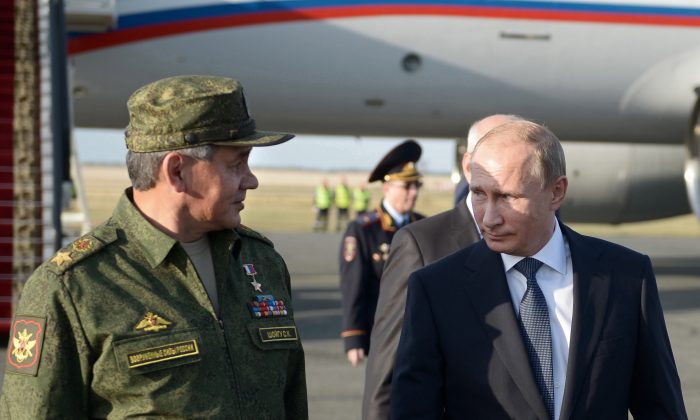 Civil war has left Syria a country in name only. The U.N. counts at least 270,000 people killed and a million more injured since fighting began in 2011. In the first eight months of 2015, half a million refugees from Syria and beyond have flooded Europe.

It is a serious crisis, and both Russian President Vladimir Putin and European Union Commission President Jean-Claude Juncker proved that they will not let this crisis “go to waste.”

In Strasbourg, on Sept. 9, Juncker called for new measures that would mandate how refugees will be redistributed across the European Union. It was a tacit admission that the EU lacks the power or legitimacy to solve the refugee crisis and can, at best, hope to come up with a way to “manage” it.

His solution—EU-mandated quotas for member states, regardless of whether or not their publics or governments like it—reflects the arrogant high-handedness typical of an EU bureaucrat. It assumes that a country like the Czech Republic should be forced to take and settle refugees who were likely drawn to Europe by the open door policies of neighboring nations such as Germany or Sweden.

Juncker also called for “common asylum standards” and thundered that “European laws must be applied by all member states.” It’s obvious that the commission president wants to use the refugee crisis to erode the power of national governments, further consolidate political power within the EU, and force the dictates of Brussels’s bureaucrats on the unwashed masses—all in the name of humanitarianism, of course!

It’s obvious that the commission president wants to use the refugee crisis to erode the power of national governments, further consolidate political power within the EU, and force the dictates of Brussels’s bureaucrats on the unwashed masses—all in the name of humanitarianism, of course!

Juncker also insisted, “We need a stronger Europe when it comes to foreign policy.”

The member states must resist such efforts by the EU to infringe on the national sovereign prerogatives to set their own foreign and defense policies. Surely the EU can find far better uses for the 2.8 million euros it plans to spend on branded tableware for its “embassies,” (to say nothing of the money it spends on diplomats’ lavish homes).

For example, it could use that money to help national governments in Europe cope with the unprecedented number of refugees. Or why not help the refugees themselves? According to CARE, the EU’s tableware money could buy more than 317,000 baby kits or more than 90,000 hygiene kits for refugees.

Putin has decided to double down on his support for the Assad regime in Syria. He’s sending in Russian troops and military advisers. And it looks like they’ll be staying, because Russia’s also shipping in prefabricated housing units for its soldiers.

Russia also reportedly plans to deploy MiG 31 and Su-25 fighters to its base in Syria. What Putin knows is that the ongoing civil war in Syria and the Obama administration’s flawed agreement with Iran presents a golden opportunity to insert himself into the heart of the Syrian conflict, propping up Assad while positioning Russia to play spoiler against the West. It’s as though Rahm Emanuel is whispering in his ear, “You never let a serious crisis go to waste.”

On Friday, Sept. 11, Russian Foreign Minister Lavrov called for the world to help arm Assad’s army. In a few weeks, Putin is expected to use his address to the United Nations General Assembly to call for the world to fight “extremists” in Syria—including those Syrian groups backed by the United States. Just four years ago, President Obama stood at that same podium and declared triumphantly “the tide of war is receding.” How wrong he was, and how ironic that Putin will use the same pulpit to de facto announce the conflict even more intractable.

Putin has decided to double down on his support for the Assad regime in Syria. He’s sending in Russian troops and military advisers. And it looks like they’ll be staying …

Obama’s foreign policy—encapsulated by the phrase “leading from behind”—has dramatically reduced the U.S. role in the world. It has in large part allowed the crisis in Syria to fester; its wider consequences are now rolling across the borders and rail crossings of Europe. Make no mistake: the complete lack of a coherent U.S. strategy for the Middle East is largely responsible for the current phenomenon of hundreds of thousands of people streaming into Europe.

With Putin ensconced in Damascus as both guarantor of Assad’s regime and spoiler to any future Western effort to resolve the civil war, the crisis in Syria and streams of refugees reaching Europe are not about to abate anytime soon, despite what Juncker believes an EU diplomatic offensive can achieve.

And so into the fall the crisis rages on. It and its long lasting effects will be with Syria and the world for decades to come.

Daniel Kochis is a research assistant at The Heritage Foundation’s Margaret Thatcher Center for Freedom. Copyright The Daily Signal. This article was previously published on DailySignal.com