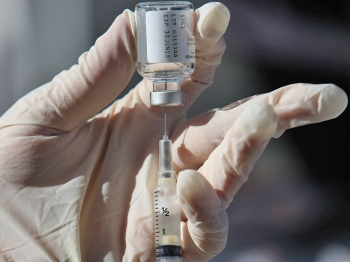 Ministry of Health recommendations have set a target of immunising 95 percent of six-month-old babies, two-year and four-year old children within the next 12 months. (Robyn Beck/AFP/Getty Images)
US

Diane Rowe
View profile
Follow
biggersmaller
Print
Parliament's Health Select Committee recommendations have raised concerns that a bid to take vaccination education and compliance to a new level, could lead to discrimination against New Zealanders who do not vaccinate.

New Zealand's vaccination levels are dismal according to the Inquiry into how to Improve Completion Rates of Childhood Immunisation released on March 24.

Dr Nikki Turner, Director of the Immunisation Advisory Centre (IMAC) said that a 2010 report found that only 41 percent of six-to-eight week old babies had received their first scheduled vaccination.

Recommendations have set a target of immunising 95 percent of six-month-old babies, two-year and four-year old children within the next 12 months. More resources and information would also be made available for health professionals and the public on issues surrounding vaccination.

The report ruled out compulsory vaccination. Around five percent of New Zealanders who had experienced bad reactions to vaccinations as well as those who have objections would not have to vaccinate.

Dr Turner's “Six Star” plan recommends that parents be obliged to produce a certificate of completion of immunisation or a current declination form in order to receive the 20 free hours of early childhood education.

“I have no problem with parents signing a declaration saying they have made an informed decision not to vaccinate as long as that does not end up with them and their children being discriminated against in some way,” says Sue Claridge, Immunisation Awareness Society spokesperson.

“We already have parents here saying, “Oh look, I have got to vaccinate, otherwise my kid won't be able to go to school. Your child can attend a state school without being vaccinated but many parents are led to believe by the system or by their GP's or by their practice nurse that their child can't go to school.”

The issue of informed consent has been totally ignored in the inquiry, she says. In the Ministry of Health 2008 Immunisation Handbook informed consent is a fundamental concept in the provision of health care services.

According to the handbook, consent is a process where the individual or parents and caregivers deciding for their children are, “appropriately informed and willing and able to agree to what is being suggested without coercion.”

Theo Brandt, IMAC communications manager disagrees. “The whole point of the inquiry was acknowledging the need for parents and health professional to have access to more appropriate information  to make decisions.”

Dr Paul Hutchison, chair of Parliament's Health Select Committee points out that issues of consent were addressed by the enquiry.

The committee recommended that the Ministry of Health provide readily available data on the positive and adverse effects of immunisation so that parents could make decisions based on a “robust evidence base.”

Hilary Butler, long time vaccination researcher and campaigner for having an informed public, says many parents have had unpleasant experiences but are afraid to talk about it publicly for fear of being rebuked by their doctors or that their children might be exposed at school.

During the gardasil vaccination campaign, the children of parents who either sent back a consent form saying 'no' or parents who refused to send back the consent form but were on the immunisation register not to be vaccinated, these children were discriminated against, she said.

“Those children are pulled up in class by health nurses. For instance one mother rang me not so long ago utterly distraught. Her child had been asked in front of the class, 'Does your mum want to kill you?' and this kid came home pleading to have the vaccine because otherwise she would die.”

However, the report also suggests the government provide incentives to parents as well, and to consider linking existing parental benefits to immunisation.

“It is unethical from the point of view that they should not be coercing parents into consenting to vaccination in order to get money,” says Ms Claridge.

People from poorer communities will comply simply because they want the money, but it is also possible that they are unaware of their rights, she said.

Theo Brandt believes that the incentives encourage parents into making a decision to either immunise or to acknowledge that they are not immunising their children, “rather than just doing nothing.”

“It is about improving the rates among those who would immunise if they had better access to services and more information,” he says of the enquiry.

Dr Nikki Turner's “Six Star” plan also recommends that GP's with children under their care ensure that they are either immunised or that parents who have refused to have their children vaccinated have undergone a “full decision-making protocol” with a completed declination form.

Parents who refuse to have their children vaccinated would be given a chance to reconsider their decision regularly.

“Stories of children being named and shamed is just more evidence that further education and information is needed by all…,” says Mr Brandt.

A Ministry of Health spokesperson confirmed that the Government had 90 days to formally respond to the report.