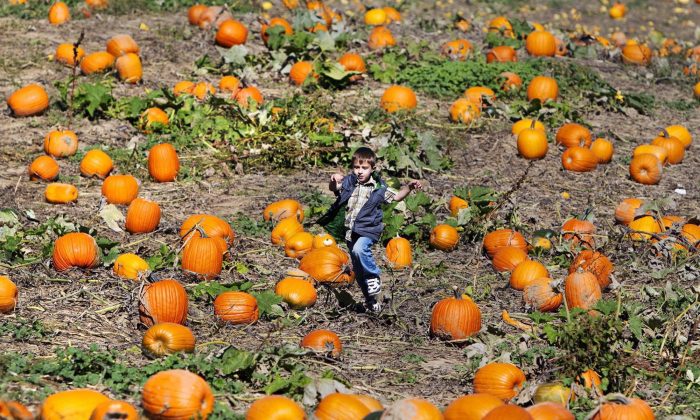 A boy runs through a field of pumpkins near Halton Hills, Ont., Oct. 9, 2010. Canadian pumpkin producers are helping make up a shortfall in pumpkins in the American Midwest due to bad weather conditions during the planting season. (The Canadian Press/Darren Calabrese)
Canada

MONTREAL—Canadian pumpkin producers are carving out opportunities in the American Midwest after heavy rain threatened to cause a jack o’ lantern shortage as Halloween approaches.

Some growers in the U.S. have sought help from other states and Canada to make up the shortfall in fresh product caused by a massive disruption during the key June planting season. Between 50 and 60 percent of the region’s crop was wiped out by record rain.

“It has caused everybody to scramble and look to get them wherever they can,” said Darrell Theis, co-owner of Theis Farms in Missouri.

About 40,000 kilograms of Canadian pumpkins were delivered to his eight-hectare farm earlier this month. That supplied about 25 percent of the deficit.

“We’re all in it together, and every once in a while we have to help each other out,” he said in an interview.

We’re all in it together, and every once in a while we have to help each other out.
— Darrell Theis, Theis Farms, Missouri

“I wouldn’t be surprised if there will be some loads coming in from Ontario, maybe a little bit from Quebec,” he said.

Like many Canadian growers, Quinn’s operation is enjoying a good selling season. Canada grew more than 65,000 tonnes of pumpkins last year, with nearly half in Ontario, followed by Quebec and British Columbia.

In the U.S., however, wet weather has driven up pumpkin prices and prompted canned pumpkin manufacturer Libby’s to warn of shortages of its pie filling since this year’s harvest will last only until next month’s American Thanksgiving.