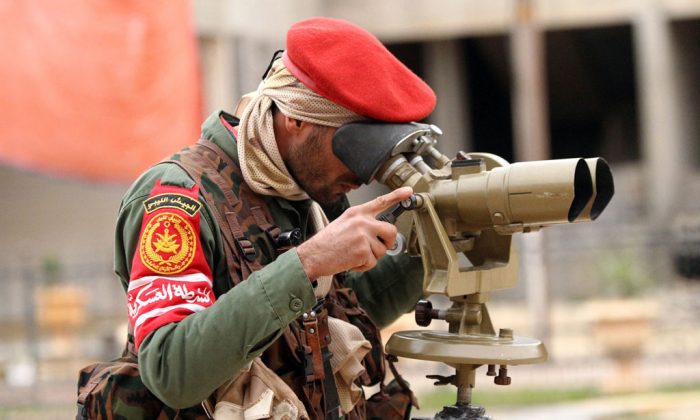 A member of the Libyan military police looks through binoculars as they fight alongside troops loyal to Khalifa Haftar, a retired general and former chief of staff for Moamer Kadhafi, in clashes with Islamist gunmen in the eastern Libyan city of Benghazi on Dec. 16, 2014. (Abdullah Doma/AFP/Getty Images)
Africa

Pulling Libya Back from the Brink

Despite an encouraging communiqué by the UN Support Mission in Libya (UNSMIL) this week praising the commitment of the various Libyan parties to a dialogue, the continued postponement of the so-called Ghadames II peace talks does not bode well. Backed by external supporters, Libya’s warring factions appear to favor a military solution to the situation, rendering the crisis increasingly beyond repair.

If the political vacuum and the chaos in the country continue, the environment will be conducive to the increasing formation of and infiltration by terrorist organizations within its borders, turning Libya into a safe haven for radical groups that may soon obligate the international community to intervene directly and aggressively. Meanwhile, innocent civilians are bearing the brunt of the conflict, with hundreds of thousands internally displaced and those stranded in neighboring countries losing hope of ever returning home.

It is thus time to prepare a robust plan of engagement. If the international community wishes to assist Libya in getting back on track toward a stable, pluralistic country, it should increase engagement by implementing targeted sanctions under UN Security Council Resolution 2174 against those individuals and entities that continue to engage in armed aggression.

Unfortunately, military action has been far too prevalent in Libya. The elected, internationally recognized parliament seated in Tobruk and its government have fully endorsed Operation Dignity, led by General Khalifa Haftar, elevating the forces from militias to part of the Libyan National Army. A harsh battle continues to rage in Benghazi, where Haftar’s troops are trying to evict the armed Islamist militias, especially that of Ansar al-Shariah.

Other clashes are occurring in various parts of the eastern provinces, where radical Islamist groups are proliferating. In Derna, particularly, these groups have become entrenched and some have declared allegiance to the Islamic State, creating a dangerous linkage between local Islamist movements and an international terrorist organization. Despite backing from Egypt and the UAE, it seems that Haftar’s troops are not reaching their objectives as quickly as they had assumed, and so the war of attrition is ongoing.

In the west, violent battles are ensuing between Zintani brigades loyal to Tobruk and militias from Misrata, Tripoli, and other mountain cities that comprise Operation Libya Dawn. The latter is solidly in control of large parts of the western coast, but finds itself entangled in clashes with the Tebu ethnic minority in the south that is loyal to the elected parliament in Tobruk and with other tribes allied with the Zintanis. To add to the complexity, Misratan militias recently launched an attack in the east in order to capture the oil fields so far controlled by the rogue militias of Ibrahim Jadhran, who is nominally allied with Tobruk.

This state of continued belligerence is not entirely Libyan-made, as the various Libyan factions are armed and shored up by foreign actors. The Tobruk assembly is strongly supported by Egypt and the UAE, and, until recently, Qatar and Turkey were the main backers of the Islamist militias propping up the rival administration in Tripoli. These developments have turned the Libyan civil war into a proxy conflict, fueling the armed struggles and presenting difficult obstacles to the UN-led mediation effort.

Karim Mezran is a senior fellow at the Rafik Hariri Center for the Middle East at the Atlantic Council and a professor at the School of Advanced International Studies at Johns Hopkins University.