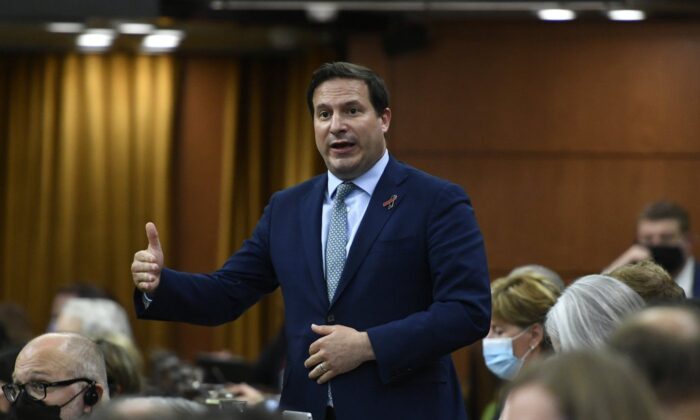 Minister of Public Safety Marco Mendicino rises in the House of Commons on Parliament Hill in Ottawa on May 31, 2022. (The Canadian Press/Justin Tang)
Canada

Public Safety Minister Marco Mendicino is defending the RCMP’s decision not to release details surrounding the death of the man accused in a mass stabbing rampage in Saskatchewan.

Mendicino says he understands the sense of urgency people feel about knowing how Myles Sanderson died after he was arrested on a rural stretch of highway in the province on Sept. 7.

RCMP said Sanderson went into “medical distress” and died in custody, but they have not released a cause of death.

Sanderson was charged with first-degree murder after 11 people were killed and 18 others injured in James Smith Cree Nation and Weldon, Sask. Sanderson’s brother, Damien Sanderson, was among the dead. Police named him as a suspect before finding his body near another scene.

“There were a number of significant flaws in the system here that have to be addressed,” Mendicino said Tuesday.

“The only way that we’re going to be able to address that is if we have an independent investigation that is carried out by the appropriate authorities, which is exactly the process that we are following right now.”

The Correctional Service of Canada and the Parole Board of Canada are launching a joint investigation into Sanderson’s case, looking into why and how he was released from prison and whether the proper processes were followed. They say the findings will be made public.

Parole documents show Sanderson had a lengthy criminal history, including 59 convictions as an adult. According to court records, that includes a violent incident in 2015 when he was charged with attacking one of the people killed in the recent rampage.

Sanderson was released in August 2021 from his first federal prison sentence. He was on statutory release, which requires people to abide by strict conditions and allows them to leave prison after serving two-thirds of their sentence in the hope they will reintegrate into society.

By May of this year, the Correctional Service declared him unlawfully at large and issued a warrant for his arrest.

Speaking in the House of Commons earlier Tuesday, Conservative leader Pierre Poilievre said while he believes in rehabilitation, the system must better protect communities from repeat violent offenders.

Poilievre, who during his speech said he made a point not to say Sanderson’s name, said sympathy for those left to mourn the victims cannot be enough.

Indigenous Services Minister Patty Hajdu said she spent time last week with community members affected by the tragedy at James Smith Cree Nation and pledged the government would be there to assist with their healing.