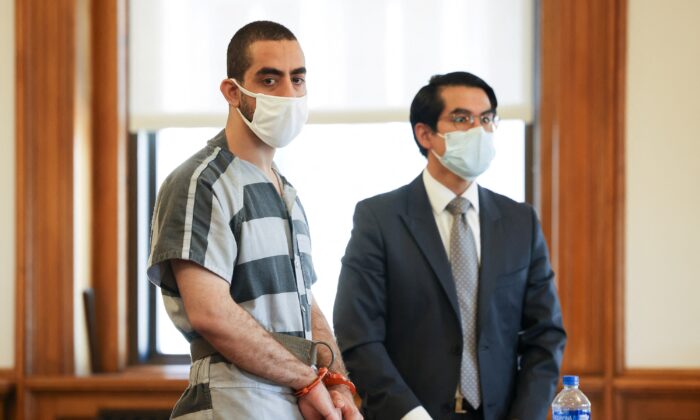 Prosecutors in New York on Sept. 14 called on a Chautauqua County judge to withhold the names of witnesses in the stabbing of author Salman Rushdie from alleged attacker Hadi Matar until the trial draws closer.

During Matar’s court appearance on Wednesday, District Attorney Jason Schmidt requested that Judge David W. Foley put in place a protection order for witnesses, citing “specific information” his office has that the suspect poses a potential threat to the witnesses.

Schmidt reportedly noted that Matar may have been motivated to stab Rushdie, who authored the controversial 1988 novel “The Satanic Verses,” due to a $3 million bounty placed on the author’s head by the late Iranian cleric and Supreme Leader Ayatollah Ruhollah Khomeini in 1989.

Also known as a fatwa, or edict, it called on pious Muslims to assassinate the Indian-born writer, claiming that his book was blasphemous. Rushdie subsequently went into hiding for several years.

Although Khomeini died in 1989, the Islamic Republic of Iran has stated that it cannot technically recall the fatwa because it can only be lifted by its original issuer.

Matar told The New York Post in August that he respected Khomeini, who he described as “a great person,” but Matar has not stated outright that he was inspired by the fatwa in his stabbing of Rushdie. In the same interview, he said he’d read a few pages of Rushdie’s controversial novel before seeing a post on Twitter last winter announcing the author’s visit to the Chautauqua Institution in New York, prompting Matar to go there.

“There’s nothing that’s been provided to us to show that the Iranian government is actively supporting the attack on any supporters of Mr. Rushdie who may come forward to testify,” he said, according to The Post-Journal.

“For the government to make the jump that there’s this fatwa that’s going to put witnesses in danger, I think that’s complete speculation,” Barone added, according to The Buffalo News.

Schmidt also requested an additional 70 days to review the evidence before turning it over to the defense due to the sheer amount of material prosecutors need to go through.

The Chautauqua County District Attorney’s Office told The Epoch Times: “On Sept.14, the Judge presiding over the case, Hon. David W. Foley, heard arguments on our application seeking (i) an expanded timeline for providing discoverable materials to the defense under New York’s reformed discovery laws given that the materials are exceptionally voluminous, and (ii) a protective order preserving the confidentiality of witnesses and limiting the persons who may review the materials we disclose.”

They added: “The Judge reserved decision and ordered a hearing on the protective order application for this Friday, Sept. 16, at 9:45am. I intend to take full advantage of the time allotted to the prosecution under applicable statutes so that we can ensure our compliance with the discovery laws, maintain the integrity of our case, and protect the safety of all witnesses involved.”

Matar, 24, of New Jersey is accused of stabbing Rushdie over 10 times with a knife on Aug. 12 as the author was set to deliver a lecture on artistic freedom at the western New York venue.

Rushdie, 75, suffered a damaged liver and severed nerves in an arm and one eye, his literary agent Andrew Wylie said not long after the attack. Wylie has cautioned that although Rushdie’s “condition is headed in the right direction,” his recovery will be long.

Matar has pleaded not guilty to the charges.