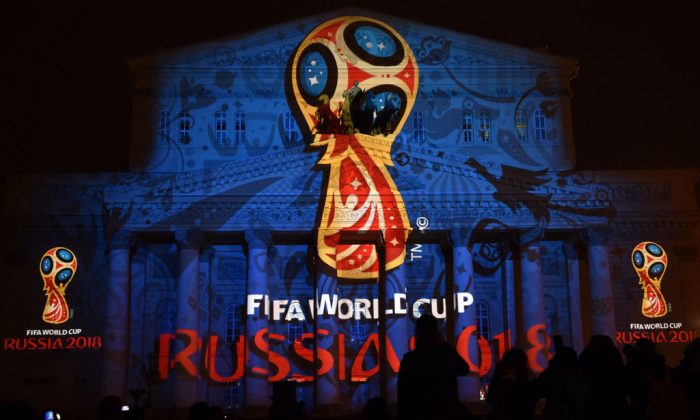 People watch as the facade of the historical Bolshoi Theatre is illuminated with the official emblem of the 2018 FIFA World Cup to be held in Russia in central Moscow on late Oct. 28, 2014. World football boss Sepp Blatter on Tuesday opposed any boycott of the 2018 World Cup in Russia and backed the huge preparations undertaken by President Vladimir Putin's government for the mega event. (Kirill Kudryavtsev/AFP/Getty Images)
Soccer

Promises, Promises – but FIFA Just Can’t Admit It Has a Problem

FIFA appears to have cleared Russia and Qatar of any wrongdoing in their successful bids to host the 2018 and 2022 world cups. Its report recognises that mistakes were made but downplays the level of improper behaviour. A rotten apple was recognised here and there, sure, but nothing more. That was to be the official narrative. It was supposed to mark the end of allegations of wrongdoing and improper conduct by football’s governing body.

But all of this was blown out of the water when Michael Garcia, chair of FIFA’s investigatory chamber, and author of the 350-page report on corruption allegations, claimed that the summary published by FIFA contained “numerous materially incomplete and erroneous representations of the facts”.

From someone steeped in the language of the law, this is as high octane as it tends to get. To Garcia, the summary published by FIFA was clearly an affront, and it took less than three hours for him to announce that he intended “to appeal this decision to the FIFA appeals committee“.

Did FIFA summarise the findings of Garcia’s report fairly? Is Garcia over-reacting? There would be one nice, easy and straightforward way to determine this – publish his findings.

If transparency, as is often claimed, really is the best disinfectant, let the cleansing begin. Indeed, if investigations into corruption allegations are going to be respected, then two things are needed. First, the investigator must be experienced, independent and competent. He or she must have genuine expertise in the area and he or she must be able to uncover all of the information that they deem necessary to come to rounded conclusions. And the investigator needs to be able to publish the findings – warts and all. The only way that such a report can influence current and future conduct is if it calls things as they are, no matter how uncomfortable that may be for present members of the organisation involved.

Garcia is certainly well respected and he is certainly competent – he ticks those respective boxes easily. The problem comes with the second of those two points, the strength to deal with whatever findings are produced.

Anyone who has even the most cursory knowledge of the way FIFA works will know that the chances of that happening vary between very slim and next to non-existent. FIFA is still in denial. At the moment those at the top of the organisation behave like alcoholics who promise to stop drinking; but secretly keep returning to that bottle they keep behind the sofa. And the chances of that changing any time soon appear to be depressingly slim.

It is not that big organisations cannot change. In recent years we’ve seen that some can. The case of Siemens – mired in a culture of bribery until fines in the US and Europe cost the company €2.5 billion – is a great example of where an organisation has put its hands up and reformed itself. But that hurts. The people who led Siemens were basically all replaced (and disgraced) and a whole new system was put in place to ensure that company representatives behaved in a more ethical fashion.

The key thing in that case – and indeed in the vast majority of cases where organisations distance themselves from their problematic pasts – is that the law was bearing down on them. In Siemens’ case both German and US prosecutors had the company in their sights. Siemens subsequently did open up, explain what was happening internally and openly admit that it was prepared to face the consequences. But in reality it had little choice in the matter.

The problem with FIFA is that it does have a choice. Why? Given that FIFA regulates itself, a public process of self-reflection is very unlikely to happen. There is no external force (that carries any significant weight) pushing FIFA in that direction.

That doesn’t mean that FIFA’s top brass see what they do as problematic, even though they’re likely to be criticised by Garcia in his report. Rather, they seem to think that they – and they alone – know what is best for the beautiful game and that they should be left to act as benevolent dictators. This logic applies even more when it comes to dealing with FIFA’s critics, for whom many in the organisation often have nothing but scorn.

FIFA’s processes might be arcane, convoluted and shrouded in secrecy, but unless it can be shown that officials have broken Swiss law – the jurisdiction where alleged corrupt acts were taking place – then the only power anyone has over FIFA is the power of persuasion. The Federal Bureau of Investigation is apparently continuing its three-year investigation into FIFA’s activities, but it will need good-quality evidence of wrongdoing before it can bring any formal charges against FIFA representatives. That’s a high barrier to jump over.

In the end, if alcoholics are to give up the bottle, they have to admit they have a problem. They have to admit that they have hurt their friends and family and they have to be prepared to face up to the hard reality of going cold turkey. It can be painful, it can be humiliating, but ultimately it is the only real way of starting over again. The summary report published by FIFA shows it remains far removed from doing any of this.

Quite where FIFA goes now is not clear. There has certainly not been closure, and there will almost certainly be further public acrimony. But whether that will lead to an acceptance that FIFA needs to wake up and genuinely smell the coffee is another matter completely.

Daniel Hough has received funding from the British Academy to conduct research on the effectiveness of anti-corruption commissions. This article was originally published on The Conversation. Read the original article.