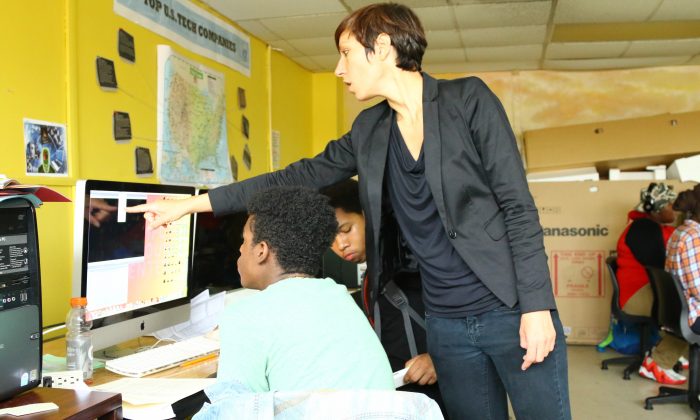 Discover How New York Teens Rap Their Way Out of Trouble

NEW YORK—Rappers from the neighborhood of Brownsville, Brooklyn often rhyme about the violent crimes that plague its streets.

Abraham Cousar, 17, used to be one of those young men who roamed the tough neighborhood. But he eventually realized music was his true dream. He cleaned up his act.

“When I rap, I can touch people. Music gets me through to people and I can express my feelings,” Cousar said. He began by making music on his smartphone.

But he really wanted to produce a professional music video for one of his songs. That was when he heard from his high school about the Youth Made Media program, offered by the nonprofit, City Parks Foundation.

Youth Made Media is a free program for teens aged 13 to 19 to learn video production and create media projects of their own. It is offered in recreation centers in four boroughs: Brownsville and Red Hook, Brooklyn; Hunts Point in the Bronx; northern Staten Island; and Rego Park, Queens. More than 350 youth have participated thus far, according to the program’s website.

Teens train in all aspects of video production, from how to write a script and use a camera, to editing and recording audio and video, according to Tomasia Kastner, program manager at the Brownsville Recreation Center.

The program recruits students during the summer and twice during the school year. At the Brownsville location, roughly 17 students enter each cycle.

“It’s a way to connect individuals to the community and teach them storytelling through videography,” Kastner said.

Cousar said the program has helped him find others in the community who are similarly passionate about music. He met an aspiring R&B vocalist, Trevor Davis, 19, whom Cousar is now working with to shoot a music video for his song, “Date Night.”

“It’s competition, but we motivate each other to get better,” Davis said. “People here give you that push, so you sing the note right every time, or scratch those lyrics if they’re not good.”

Cousar and Davis plan to work on more songs together. They hope more of their peers can join this program and pursue a passion that keeps them off the streets and out of trouble.

“If we had more programs like this, it wouldn’t be as dangerous here,” Cousar said.

“A lot of kids see what we do and feel inspired. It’s like dropping a pebble in a pond. It spreads ripples everywhere,” Davis added.

Sadia Cambridge, 22, also made a short film inspired by the struggles of youth in Brownsville. The film, called “Ride or Die,” revolves around “a kid who has to struggle between school and living in the streets,” she said. Cambridge made the film during the Youth in Media program, which she joined last fall. She continued working as an intern in the program to teach students, while creating projects of her own.

“Some people get involved in gangs because they don’t have families that support them. They get in too deep where they can’t get out,” she said. She hopes her film will resonate with those who are dealing with this dilemma in real life.

Cambridge, who is from nearby Canarsie, casts people from the Brownsville neighborhood in her films, as a way to let them know about the program. “If they see others doing something with themselves, maybe they’ll want to do it too. That’s the most rewarding,” she said.

Some participating in the program have been placed there as part of the city’s Summer Youth Employment Program (SYEP), which offers paid summer jobs throughout the city for its applicants.

CeeSoul (stage name), 16, is one of them, who works as a student teacher for the program, while learning to produce music videos for his three-member hip-hop group from Clinton Hill, Brooklyn, The Individuals. CeeSoul said at Youth Made Media he has learned how to create storyboards and produce his group’s videos more efficiently.

He hopes his group’s videos can inspire more people to pursue their dreams. “We want to spread the message to persevere, to strive and make it there,” CeeSoul said.