Professionals: Shen Yun ‘A truth that needs to be told’ 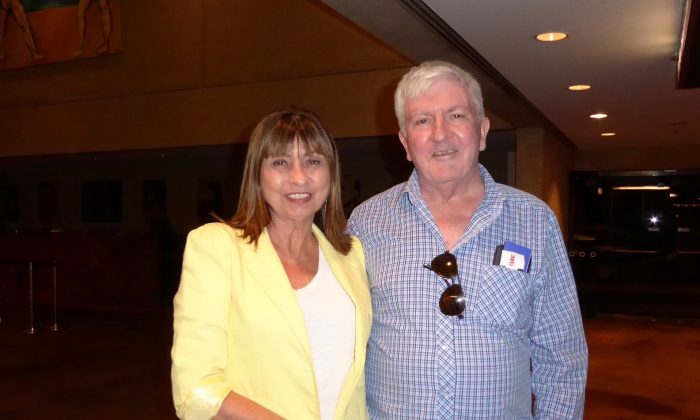 Chris and Susan McGrath at the Shen Yun performance at the Lyric Theatre QPAC in Brisbane on Feb. 26, 2016. (Steven Xu/Epoch Times)

BRISBANE, Australia—Professionals Chris and Susan McGrath were more than impressed after watching Shen Yun Performing Arts at the Lyric Theatre QPAC on the banks of the beautiful Brisbane River on Friday, Feb. 26.

“The dancers were amazingly talented, it was a beautiful show I thought. The innovated screen was actually brilliant and the way the costumes reflected the colours in the screen was a work of art,” said Mrs. McGrath.

The traditional culture of China has always embraced spiritual realms openly,and Shen Yun accordingly uses original compositions, choreography, costumes, and digitally animated backdrops to give theatergoers a chance to experience a time when humankind and the divine were intimately connected.

Mr. McGrath said Shen Yun had done that very well. “It is displayed very openly and very nicely, you can picture well. We all know that people in China do not go around dancing like that, but the whole concept was very well portrayed.”

“As a show it was brilliant,” he added.

Both professionals appreciated the quality of dance and music in Shen Yun but admitted that the world class performance had given them much more to think about. Shen Yun had clearly demonstrated the threat to traditional Chinese culture in China today and the struggle for those ensuring that it continues for future generations.

“I think culturally, everybody craves freedom and I think it demonstrated that the people of China have a strong tradition of beauty and freedom and they are being restricted and I don’t think it’s fair,” said Mrs. McGrath. “That was my interpretation of what these very talented dancers were able to tell people who didn’t really have any knowledge of the story.”

“They are being persecuted,” said Mr. McGrath.

“I think the message the dancers were giving, it’s a truth that needs to be told,” Mrs. McGrath added. “They are not allowed to put their point forward, [in China]. That is very wrong.”

Based in New York, Shen Yun Performing Arts was established by top classical Chinese artists in 2006. The company’s mission is to use performing arts to revive the essence of Chinese culture —traditionally considered a divinely inspired civilization. For that they are seen as a threat by the Chinese communist regime and are presently unable to perform in mainland China.

“It doesn’t matter what they actually stand for, it’s the fact that they stand for something different from what the Communist Party wants,” said Mr. McGrath.

“It is interesting that it comes from America and that explained it to me, yes of course you can’t come from China, you cannot do this …Well it’s ridiculous isn’t it?” he added.

According to the Shen Yun website “Over its past 60 years of rule, the communist regime has treated traditional Chinese values centered on the idea of harmony between heaven and earth as a threat to its existence. And in its systematic campaigns like the Cultural Revolution, it has uprooted traditional beliefs and destroyed ancient treasures, bringing traditional 5,000 years of civilization to the brink of extinction.”

China was once known as the Celestial Empire, and its culture believed to be divinely imparted. Through music and dance, New York-based Shen Yun aims to revive the traditional culture.

The couple said they appreciated Shen Yun’s mission in using the performing arts to revive the essence of Chinese culture.

“We are very grateful for the opportunity to have seen this, to learn the story behind it,” Mrs. McGrath said.

Reporting by Steven Xu and and Chris Ford