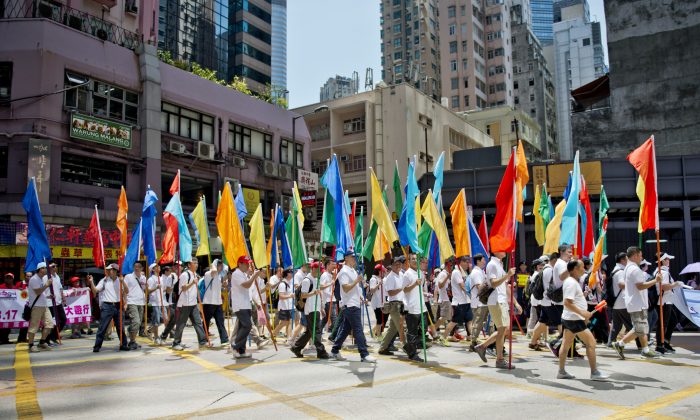 People carry flags as they take part in a Beijing-organized rally in Hong Kong on Aug. 17, 2014. Thousands were brought in from China to protest against the demand for democracy in Hong Kong. (Alex Ogle/AFP/Getty Images)
China

Tens of thousands of protesters marched through Hong Kong’s streets Sunday afternoon, calling for Hong Kong to submit to Beijing’s political control and stop listening to democratic organizers who say the city-state should be able to elect its own leaders without China’s interference.

The only problem was that an unknown number of them were paid to turn up, according to Hong Kong television reports, and many of them may not have been Hong Kong residents at all.

Organizers of the rally, which call themselves the Alliance for Peace and Democracy, are protesting against an organic Hong Kong movement called Occupy Central With Love and Peace. For months the Occupy movement has proposed mass civil disobedience in Hong Kong’s financial center, in an effort to bring a change to Hong Kong’s voting system. Currently the system allows the Chinese Communist Party to filter out candidates whom it does not like for the office of the chief executive, Hong Kong’s top political post.

In practice, the current arrangements mean that since the colony of Hong Kong was handed back to the People’s Republic of China by the United Kingdom in 1997, it has been under the control of political leaders effectively appointed by Beijing.

The Alliance for Peace and Democracy would like to keep it that way. The level of support it is receiving from Hong Kong society, and even from patriotic Chinese, is unclear, however. According to Hong Kong University’s Public Opinion Program, there were between 79,000 and 88,000 participants in the afternoon march—half the number that turned out for the Occupy movement on July 1.

But it’s unclear how many of them were actual Hong Kong residents. According to the New York Times, many protesters were born in mainland China, waved Chinese flags, and marched in groups designated by their hometowns in China. Older people were in force, in contrast to the younger demographic of the Occupy movement.

Perhaps the most damning piece of evidence about the protesters came out in a report by Now News, a television channel in Hong Kong. A reporter with that station infiltrated the protesters, and received a HK$400 (about US$50) payment, and a meal, for his participation in the march. He later returned the money and, identifying himself as a reporter, asked where it came from. One of the protest organizers said it was his own money.

Tensions have been running high in Hong Kong since at least June, when a top Chinese Communist Party instrument published a “white paper” that sought to reinterpret the lines of power between the city-state and China. The thrust of the paper was that the autonomy of Hong Kong’s government was granted by Beijing, and could be taken away by Beijing. Civil society groups in Hong Kong, who wish to be able to elect their own leaders who represent their interests, were outraged by what they saw as the interference by Beijing.

Battle lines between pro-Beijing and pro-democracy forces have become sharper ever since. The Big Four auditing firms took out advertisements in local Chinese newspapers on June 21, which declared that the Occupy protests, if they went ahead, would bring chaos and social unrest.

The following week, on June 28, hundreds of lawyers dressed in black marched from the High Court to the Court of Final Appeal, where they stood for three minutes in silence, a rare expression of solidarity with pro-democracy groups. Professionals in Hong Kong, as a collective, generally have not organized politically.

The most recent sign of revolt from Hong Kong is a rare vote of no confidence in the president of the Hong Kong Law Society by member lawyers on Aug. 14: 2,392 members supported the no confidence poll, while 1,478 voted against. The Law Society has 8,000 members. Ambrose Lam, the current president, had publicly supported Beijing’s white paper. According to a Hong Kong lawyer who spoke with Legal Week, “His views touched on the nerves of a lot of lawyers in Hong Kong.”