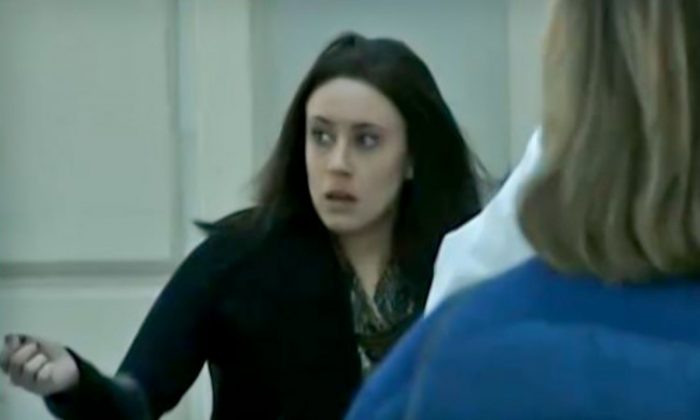 Casey Anthony, the Florida woman who was acquitted of murder charges in the death of her daughter Caylee, was not found dead this week. (Joe Burbank-Pool/Getty Images)
Crime and Incidents

'Caylee is not coming home'
By Jack Phillips

A private investigator who had worked for Casey Anthony’s defense team has claimed her attorney admitted that his client murdered her daughter.

Anthony was found not guilty of first-degree murder and other serious charges against her in the 2008 death of her 2-year-old daughter, Caylee, who had gone missing in Orlando, Florida. She was acquitted in 2011.

But according to a WFLA-TV report on Wednesday, Private investigator Dominic Casey said her lawyer admitted that she killed her daughter and dumped the body.

Two affidavits from Dominic Casey were included in documents that were filed in the Orlando U.S. Bankruptcy Court in April 2016. They are part of Anthony’s bankruptcy case. In July 2008, the Baez Law Firm hired him to work for Casey Anthony’s defense team, the papers show.

Dominic Casey said in one of the affidavits that when Caylee was declared missing, Anthony became aware of phone calls that were made to police by Roy Kronk, a meter reader, in August 2008. The calls indicated he might have found the remains of the girl.

“She (Casey Anthony) told me at that time, ‘Caylee is not coming home, they need to get used to that’,” said Dominic Casey in the affidavit. He said Anthony suggested Kronk should be implicated in the disappearance of her daughter.

“In October 2008, just prior to the remains being found, Casey Anthony told me that when Caylee came up missing, the back gate was left ajar. Since Roy Kronk was a meter reader for the house, maybe ‘we could say Roy Kronk kidnapped Caylee,'” the private investigator said in the affidavit.

He added: “Based on my personal knowledge of the events and statements I personally heard from Casey Anthony she authorized and permitted her attorneys, including Jose Baez, to make false statements about Roy Kronk to portray him as a murderer and or kidnapper of Caylee Anthony.”

In another affidavit, Dominic Casey said he was hired by Anthony lawyer Jose Baez within two weeks of Anthony’s arrest, which occurred on July 16, 2008.

Then the private investigator dropped the bombshell claim: “Saturday, July 26, 2008, Baez had told me that Casey had murdered Caylee and dumped the body somewhere and, he needed all the help he could get to find the body before anyone else did.”

He also made more sordid claims, claiming Anthony and Baez were involved in a sexual relationship. “Within two weeks, the misconduct between Casey and Jose Baez had escalated.,” he said, reported FOX News.

“That night I told her that she cannot allow him to continue engaging in this behavior. Casey told me she had to do what Jose said because she had no money for her defense,” he added.

Anthony was convicted of lying to police, and she filed for bankruptcy in 2013.

Since then, she has kept a low profile. According to reports last year, she still lives in Florida. Her former attorney, Cheney Mason, told CNN she lives in fear for her life.