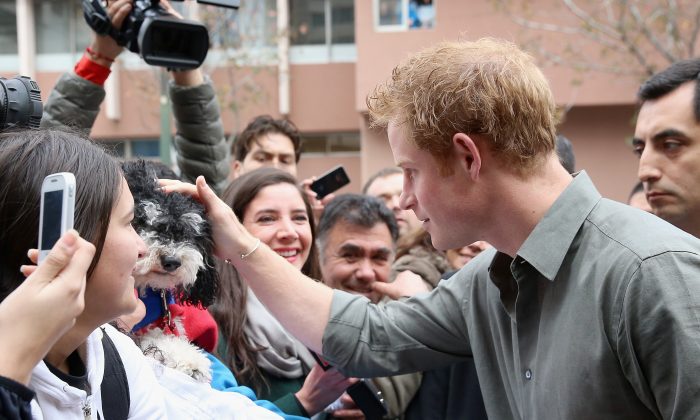 Prince Harry pats a dog as he meets members of the public outside Valpariso Firestation on June 28, 2014 in Valpariso, Chile. Firefighters from Valpariso were involved in dealing with the devastating forest fires that hit the area in April. Prince Harry is on a three day tour of Chile after visiting Brazil. (hris Jackson-Pool/Getty Images)
Entertainment

Prince Harry is allegedly taking hair transplants out of fear that he’ll start losing his hair like his brother, Prince William, says a dubious report on Monday.

A source said Harry is “horrified” about the prospect of going bald.

“Prince Harry is so horrified about going bald that he is ready to have a hair transplant before his condition gets any worse. And, he’s been getting advice from Hell’s Kitchen star Gordon Ramsay, who has waged his own war against hair loss. Royal playboy Harry is said to have been using a Rogaine style product for the past couple of years to cover up his thinning thatch,” said an alleged source via CelebDirtyLaundry, which has a spotty record on its royal reporting,

There’s obviously no way to prove whether Harry is using a Rogaine-like product or has considering using hair transplants.

But the Express newspaper reported a few months ago that both William and Harry “have inherited the royal family’s hair loss gene and according to an expert, the brothers will be totally thin on top in less than 20 years.”

“But it’s not just our future king who faces problems with male pattern baldness. His younger brother, Prince Harry, who turns 30 on September 15, is already showing the first signs of baldness on his crown,” the report added.

“Around a quarter of men start going bald before the age of 30, so this is hardly a big surprise especially when it runs in the family as it does for the Windsors,” Shahmalak said, via the DailyMail.

“If Harry’s hair loss progresses in the normal way, I would expect him to have a significant bald patch around his crown by the time he is 40. It will be worse if it also spreads to his hairline as it has with his brother,” he added. “Hair loss can have a devastating impact on a young men like Harry. It can shatter their confidence and lead to significant loss of self esteem.”

Shahmalak noted that strong family genes are the most significant factor in hair loss.