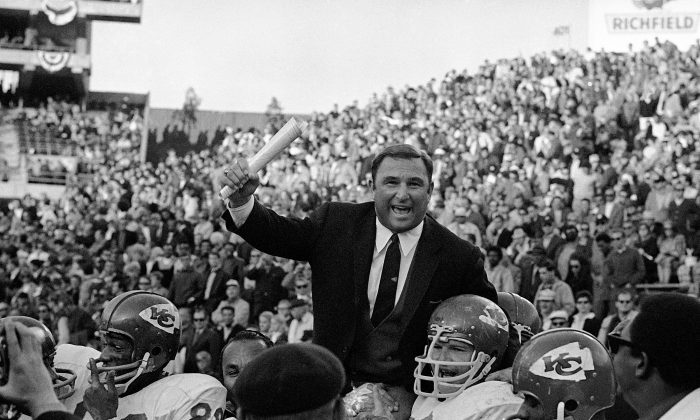 In this Jan. 4, 1970, file photo, Kansas City Chiefs coach Hank Stram is carried on the shoulders of his team after the Chiefs defeated Oakland Raiders 17-7 to win the American Football League title in Oakland, Calif. The flames have been rekindled in a once-great rivalry. The Chiefs and Raiders are fun and relevant again, playing for first place just like they did so many times in their colorful past. (AP Photo/File)
12- OBSOLETE

Preview: WHEN IT WAS JUST A GAME

NFL football is center stage. And you gotta love it.

Next fall my WHEN IT WAS JUST A GAME will be taking center stage. For those of you who are interested in excerpts, sneak previews, samples, here you go. The late and great KC coach Hank Stram plays a big role in the story – here is just a taste.

“He was a piece of work.” –Ed Lothamer

“Strutting. Flamboyant. Wonderful personality, he always had something for you.” -Edwin Pope

Standing just a bit taller than 5’7″ and weighing a bit less than 200 pounds, Henry Louis Stram was called “the mentor” by himself and others.

ED LOTHAMER: Hank was short and stout but pretty well-built. He was strong.

Born in Chicago on January 3, 1923, Stram grew up in the windy city and in Gary, Indiana, and was always deeply interested in sports, especially football.

DALE STRAM: My grandfather was Polish-born. His name was Henry Wilczek. He was a tailor and sold door-to-door for a company. He also was a wrestler. The guy who trained him was German.

My grandfather was built like my dad, very strong. His trainer called him “Stramm,” which meant strapping, strong. So my grandfather dropped off one “m” and took the name “Henry Stram, the wrestling tailor.”

Growing up my dad was known as Henry Stram. But he was born Henry Louis Wilczek. In 1943, my dad went into the service. They saw “Henry Louis Wilczek on his birth certificate and asked if he wanted to change it legally to “Stram,” the name he used. That was how he evolved into Hank Stram.

A halfback at Purdue where he had also played baseball, Stram had gigs as an assistant coach at Southern Methodist University, Notre Dame and Miami. When Lamar Hunt founded the American Football League and took over as owner of the Dallas Texans in 1959, he went about the task of finding a head coach. An offer was made to Oklahoma’s head coach Bud Wilkinson. The legendary footballer declined the opportunity. New York Giants defensive coordinator Tom Landry also turned down the opportunity. Hunt turned around and hired Hank Stram who he had known when an assistant coach at SMU back in the time when Hunt had been a backup on the team.

“We were awfully lucky,” is how Lamar Hunt characterized the hiring of Stram. “He had never been a head coach before, and you never know how that’s going to work out. In our case it worked out tremendously. I think it worked out great for his career, too, because he ended up in the Pro Football Hall of Fame.

“If you look at NFL Films as the film arm of the league, Hank was our Errol Flynn,” said Steve Sabol, president of NFL Films. “He was the first swashbuckler, the first coach who really understood, more than any other coach, that football was also entertainment.”

ED LOTHAMER: He was a piece of work. There were times when he had practices and a band playing. He knew a lot of people and many celebrities. If an entertainer or celebrity was in Kansas City, often they would call Hank, and Hank would invite them to come over and watch practice. People like Muhammad Ali, Jim Nabors, Al Hirt, Edie Gorme and Steve Lawrence, all watched us practice. You never knew who was going to pop up.

ED BUDDE: I really respected him. Hank Stram was ahead of his time: we had a rollout, we had an “I” formation, to confuse the defense we had people in motion. He was a great coach, and we all loved him. He was like a father figure for us.

The inventive coach was the architect of a system he called his “movable pocket.” He was confident it would confuse other team’s pass rushes. Stram had his quarterbacks moving out to throw from behind either right or left tackle. It was in Stram’s words “Something to keep the other team guessing reducing their pass rush effectiveness by 50 percent. They cannot groove their rush.”

The first pro football coach to utilize a moving pocket for the quarterback, Hank Stram also was the first to put in play a two-tight-end offense and a stack defense, linebackers lining up behind the defensive linemen rather than between them. Creating minicamps and bringing players in monthly during the off-season was another Hank Stram innovation.

ED LOTHAMER: Hank was probably one of the true promoters in football. Hank was always upbeat. What we heard – and I don’t know if this was true — is that players would watch films with Lombardi, he would chastise people and kind of get tough with them: You know, “You weren’t good on this play” or whatever.

Hank never did that. Hank had this little flashlight thing with an arrow on it. And he would just put the arrow on you on the screen.

BILL McNUTT, III: Hank was full of idiosyncrasies, marvelous ideas, and special ways of having things done. He was brilliant.

I was a ball boy all those years in training camp. Every Chief player that ever played for Hank Stram had to have his shoe-strings changed after the last pre-season game. Hank, earlier in his coaching career when he was an assistant coach, felt that he lost a game because a key player broke a shoe-string.

Now, remember it was usually just a cotton shoe-string and equipment wasn’t as tough and well-designed back then as it is now. So this would be a common thing for people to break shoe-strings. By golly, we put new laces on. That’s a monumental task because then these players would show up for every game with 2 or 3 pairs of shoes based on the conditions because there was no artificial turf.

Well, Bobby Yarborough was supposed to be the shoe-string guy, but everybody was. But my point is, we were the ones that had to do that. Even today, I amaze my children at how quick I can tie a shoe-string.

Another thing was that Hank always wanted a stick of white spearmint gum and a stick of yellow Juicy Fruit gum in every locker. He thought that if players chewed that gum, it would calm them down a little bit.

Dr. Harvey Frommer is in his 39th year of writing books. A noted oral historian and sports journalist, the author of 42 sports books including the classics: best-selling “New York City Baseball, 1947-1957″ and best-selling “Shoeless Joe and Ragtime Baseball,” his acclaimed Remembering Yankee Stadium was published in 2008 and best-selling Remembering Fenway Park was published to acclaim in 2011. The prolific Frommer’s WHEN IT WAS JUST A GAME, AN ORAL HISTORY OF SUPER BOWL ONE will be published in 2015.