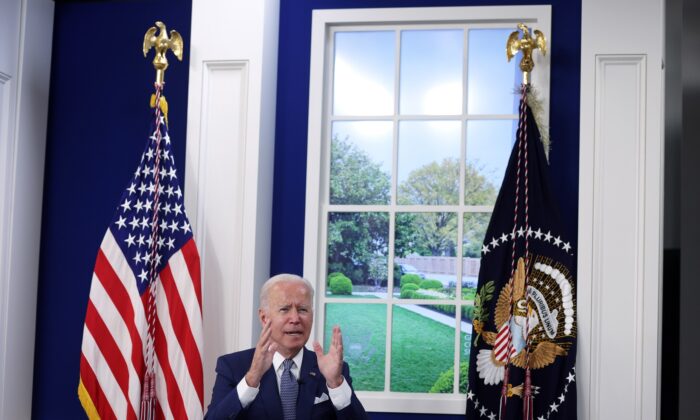 President Joe Biden’s U.N. speech on Sept. 22 showed yet again that he has spent so long in the trenches of partisan political conflict that even as the president of the United States, speaking to the world ostensibly on behalf of his country, he can’t help seeing everything beyond our borders (such as they still are), as well as everything within them, in terms of domestic politics.

For just as he couldn’t rise above partisanship to take responsibility for his actions as president and commander-in-chief of the Afghan debacle but tried to blame it all on Donald Trump, so it appears that he can imagine no role for America in the world apart from repudiating what he sees as the Trump legacy wherever he finds it.

But then I suppose that the old rule about politics stopping at the water’s edge has been a dead letter for a couple of decades at least.

At any rate, his media cheerleaders had no problem with his veiled attack on his predecessor. “Joe Biden’s first U.N. speech aimed to erase the Trump era,” wrote Hayes Brown for MSNBC. “Biden’s first United Nations speech didn’t mention Trump. But it was all about rebuking him.”

Aaron David Miller for CNN took a slightly more measured tone: “At UN, Biden distinguished himself from Trump, but sketched an agenda that will be hard to carry out.”

That was putting it mildly! But never mind. The only thing that was supposed to matter is that, now and forever, he remains the un-Trump.

It seems never to have entered the presidential mind that people from far-away lands might, unlike his fellow Democrats, expect something more from him than his not being Donald Trump. That’s a pretty low bar to get over, I would have thought, but Joe seems to regard it as the crowning achievement of half a century of public life—and to expect the rest of the world so to regard it too.

The parochialism of his world-view was also on display in his contention that “we’ve ended 20 years of conflict in Afghanistan.”

In fact, of course, “we” have done no such thing. This is once again to take a narrowly, Washington-centric view. The “conflict in Afghanistan” will simply continue without us as a civil war, but that’s close enough for government work. It’s ended so far as Joe is concerned.

Even those who were more critical of the speech—for its vagueness to the point of vapidity and its endless series of platitudes and meaningless clichés about “relentless diplomacy”—didn’t stop to ponder the foolish and quite undiplomatic inappropriateness of devoting such an important speech at such a crucial moment for American leadership to sniping at his predecessor, whom, nevertheless, he did not name.

“Our own success is bound up in others succeeding as well,” he told the assembled delegates. If that meant anything at all, it meant “Down with ‘America First’!” Presumably he thinks that that’s something they have been longing to hear as much as he’s been longing to say it.

Yet some of them couldn’t even see any important differences between Joe and his much despised predecessor. To the understandably disgruntled French foreign minister he was just “Trump without the tweets.”

He may believe that, as he told a gathering of State Department functionaries back in February, “America is back,” but for the world outside Foggy Bottom America has never been away—at least not up until now.

For the foreigners gathered at Turtle Bay, America remains the looming presence on the world stage that it has been for three-quarters of a century, though they may be wondering—particularly after our abrupt abandonment of our Afghan allies and our failure to consult about it others who had willingly joined us in that ill-fated adventure—how much longer that will continue to be the case.

For them it must look less like America’s back, more like it’s finally going away. A lot of them probably aren’t all that happy about this.

The President had no good news for those who still believe that America can be a force for good in the world. Still, he sought to console our former friends and allies for America’s retreat by reminding them that we’ll still be around to preach and moralize at them, as the occasion demands, lecturing the rest of the world, along with our own people, about climate change and getting vaccinated, but with a dollop of Jimmy Carter-style human rights talk just for them.

Except that, varying the old Jimmy-formula so as not, perhaps, to look like a plagiarist, he spoke not of human rights but of “human dignity”—which he promised to use American influence to “advance … around the world.”

So. That’s all right then.

There was little coverage of the speech in the official, pro-Biden media—I suspect not only because it was far from being the triumph they were hoping for but also because we’ve heard it all before.

The platitudes are too familiar to need repeating, though where they were repeated, the media tried to give them at least a little bit of an edge of resolution and specificity, as in the first paragraph of the New York Times’s report.

“President Biden,” wrote David E. Sanger for the Times, “fighting mounting doubts among America’s allies about his commitment to working with them, used his debut address to the United Nations on Tuesday to call for ‘relentless diplomacy’ on climate change, the pandemic and efforts to blunt the expanding influence of autocratic nations like China and Russia.”

In fact, Biden never mentioned either Russia or China, as Mr. Sanger goes on to note, only certain unnamed “authoritarians of the world” who, he said, “may seek to proclaim the end of the age of democracy.”

So it appears that he’s not daring to say even so much as that these shadowy figures are seeking to proclaim the end of the age of democracy. “But,” he adds, if they are, “they’re wrong.”

Finally a bold statement! Take that, you authoritarian straw men! This sounds almost as scary as his threat of “relentless diplomacy.”

I don’t think the authoritarians, whoever they may be, can be too worried about anything likely to come their way from this president. Do you?