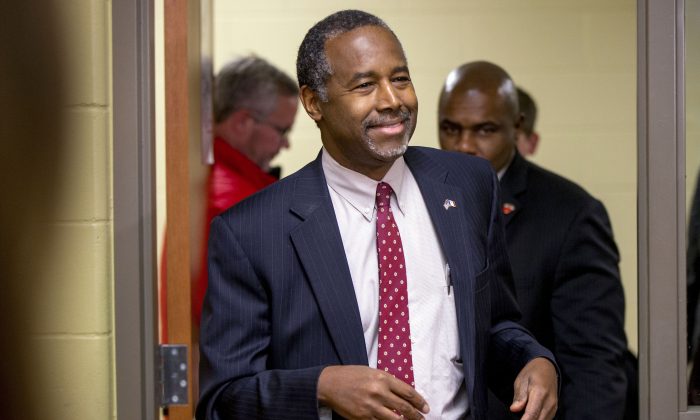 Republican presidential candidate Ben Carson has returned to the campaign trail after taking several days off following the death of a volunteer.

Braden Joplin, 25, was killed in a car crash in western Iowa on January 19.

Carson canceled events that were scheduled for Tuesday and Wednesday and traveled to Omaha to meet with Joplin’s family. He also chartered a plane to take the family to Omaha from Texas.

The crash left two other volunteers in the hospital but they’re expected to recover.

“I had the opportunity to get to know (Braden) and the thing that impressed me the most is how compassionate he was and how caring he was about the feelings of other people,” Carson at a press conference, reported the Des Moines Register.

“I hope his death will not be in vain. He wanted America to be a kinder and a gentler place.”

Carson told supporters via Facebook that he would resume his campaign on Thursday.

According to his website, he had four town hall events scheduled for Friday–one each in Des Moines, Creston, Mt. Ayr, and Clarinda. He has an event in Sioux City on Saturday before traveling to Colorado for several events.

Unfortunately for Carson, he has a lot of ground to make up.

A CNN/ORC poll on Thursday had him with only 6 points, behind three other candidates including frontrunner Donald Trump. A Loras College poll had him also behind Trump, Ted Cruz, and Marco Rubio with 8 points; while a KBUR poll showed him in third with 11 points but still well behind Trump and Cruz.

A national Monmouth poll this week showed Carson in fourth with 8 points.

In a North Carolina primary poll Carson was sitting in fourth with 8 points, but he managed only 3 points in Florida and only 1 in New Hampshire, where several other candidates such as Chris Christie and Jeb Bush are polling well.