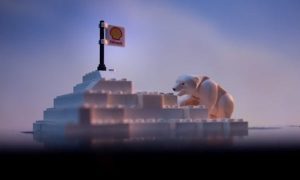 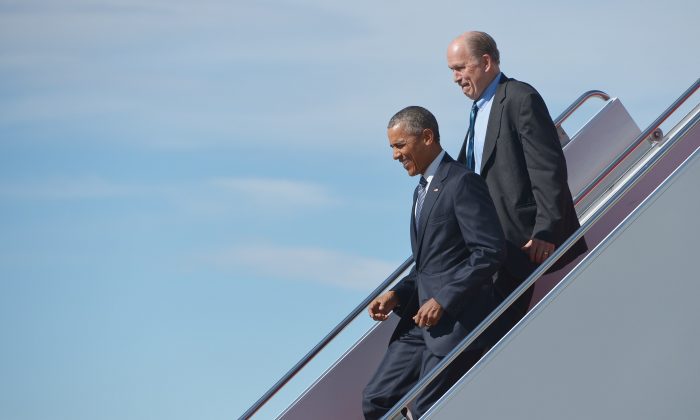 As President Barack Obama embarks on an historic visit to Alaska to address the state’s battle with global warming, the pangs of his recent decision to permit Royal Dutch Shell to begin drilling for oil and gas in untouched Arctic waters off Alaska’s northwest coast looms overhead.

Just two weeks ago, the Interior Department issued a permit to Shell for drilling an exploratory well into Arctic Ocean oil-bearing zones, an extension of the oil conglomerate’s previous permit issued in July, which only allowed drilling at the top of such zones. Shell was prohibited from drilling a well until it obtained the appropriate emergency response vessel, which it has now brought to the region.

But the president is focused on the task at hand, to address the real threats of climate change that Alaskans are experiencing. He has called for national relationship-building to collectively combat the ongoing crisis.

The president is well aware that Shell workers are already in Alaska setting up equipment for the historic drill.

In his weekly radio address on Saturday, Aug. 29, the president identified the real threats of climate change that the state of Alaska has been facing.

“More frequent and extensive wildfires; bigger storm surges as sea ice melts faster; some of the swiftest shoreline erosion in the world–in some places, more than three feet a year,” the president said, also noting that four villages are in danger of relocation due to rising sea levels.

He said he is committed to establishing greater collaboration with Alaska Native tribes. Generations of Alaska Natives have depended on marine life as a source of hunting, but with rising ocean temperatures and increasing acidity, fish, shellfish, and marine mammal numbers are declining.

Demonstrating the president’s devotion, the day before Obama headed to Alaska, the White House announced that Interior Secretary Sally Jewell, was restoring North America’s tallest mountain, Mount McKinley, to its ancient Native name, Denali—a name it was called for thousands of years before 1917. In February 1917, the United States formally recognized the mountain in former President William McKinley’s name after he signed the Mount McKinley National Park Act.

Obama plans to discuss several initiatives to build stronger relationships between the federal government and state and local Alaska communities, and Alaska Natives. He will travel above the Arctic Circle to meet with everyday Alaskans and learn about their daily struggles with climate change and their dependence on energy development for economic survival, according to the White House.

Earlier this summer, hundreds of wildfires charred over 5 million acres of land in Alaska–damaging homes and threatening communities. The president believes it is necessary to convene other Arctic nations to lend a helping hand.

While the president intends to meet climate change concerns head-on and has so far enacted groundbreaking national rules to reduce the carbon footprint, critics worry that he isn’t doing enough to discourage oil and gas investments. And the recent permits issued to Shell are a prime example.

But the president has consistently pointed out that the Shell leases for drilling in the Arctic were purchased before he took office. In defending his decision to approve Shell’s most recent application, Obama highlights his insistence that the oil company meet high standards for safety in its operations.

“It’s a testament to how rigorous we’ve applied those standards that Shell has delayed and limited its exploration off Alaska while trying to meet them,” he said in the address.

State and local officials as well as Alaska Natives are hopeful that the challenges of climate change and oil and gas drilling can be addressed and balanced solutions can be achieved.

In the kickoff of a live-streamed State Department climate summit in Anchorage on Aug. 31, the mayor of the Northwest Arctic Borough of Alaska, Reggie Joule, who is an Inupiat Native, called for responsible development of Alaska’s rich resources, stating that “they are a gift.”

“While warmer climate brings many challenges, it also brings many opportunities,” he said.

“We need to develop Alaska’s resources, a need to do it in a way that recognizes the impact upon the Arctic and the consequences of ill-devised action that would occur and impact climate change if we are not smart and we are not resilient,” he urged.