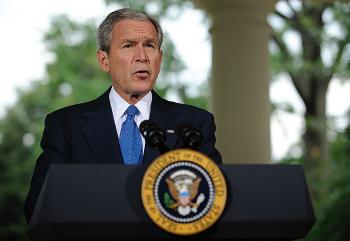 U.S. President George W. Bush delivers a speech from the porch of the Oval Office at the White House on July 31, 2008 in Washington, D.C. Shawn Thew/Getty Images ()
US

WASHINGTON, D.C.—With the Olympic Games less than two weeks away, the world’s supporters of human rights have shined a spotlight on China’s failure to keep promises made to the International Olympic Committee to improve policies and practices to uphold the core principals of the Olympic Charter including the “preservation of human dignity.”

The U.S. Commission on International Religious Freedom held a press conference on July 30 to urge President Bush to use his visit to the opening ceremonies of the Olympics in Beijing to speak openly to China’s people and to its leaders about his stance on Human Rights.

The U.S. Commission on International Religious Freedom and the Congressional Human Rights Caucus gathered with representatives of human rights organizations at the Capitol Building on China’s continued suppression, detention, and persecution of dissidents and human rights supporters in the days leading up to the Olympics.

In its formal recommendation, the U.S. Commission on International Religious Freedom suggests that while in China President Bush give a publicly broadcasted speech emphasizing religious freedom as a universal human right and to urge the Chinese government to guarantee the religious freedom of Tibetans.

The Chinese government has increased arrests and detainment of dissidents in a large scale pre-Olympics “clean up“. Targeted groups include: Tibetan Buddhist monks, protestant religious leaders, and supporters and practitioners of Falun Gong, a practice of which Chinese officials have described as the most persistent internal threat that could disrupt the Olympics.

“Hopes that the Olympic Games would dramatically improve human rights conditions in China have not been realized,” said Commission Chair Felice D. Gaer. “Instead, the situation has grown increasingly dire, particularly for many of China’s religious adherents.”

Terri Marsh of the Human Rights Law Foundation described China’s practices as a pattern of suppression.

Chinese Exile Harry Wu of the Laogai Research Foundation, who met with President Bush earlier in the week sited key points of the human rights issue in China, including: population control, execution, organ harvesting, and a lack of Internet freedom.

The U.S. Commission on International Religious Freedom expressed hope that the media’s reporting of the Olympic Games would give a true account of what is happening in China and that the Olympic Games not be used to mask human rights abuses.