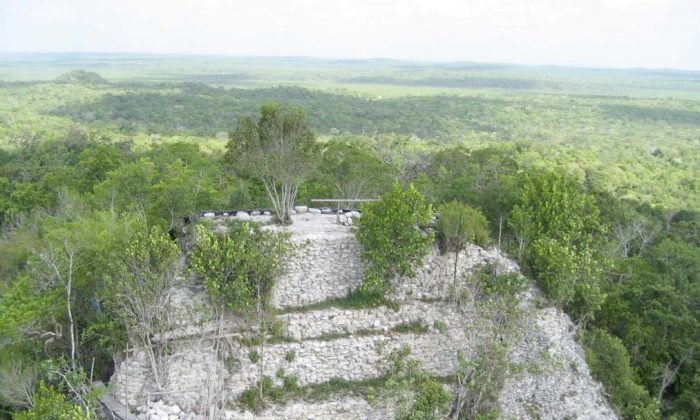 An aerial view of a pyramid in Cuenca Mirador, Guatemala. (Courtesy of Global Heritage Fund)
Americas

Efforts to preserve the 51 Mayan cities in Cuenca Mirador, northern Guatemala, are also providing training in forest stewardship and other life skills for locals.

When Richard Hansen arrived at the site in northern Guatemala in 1978 to establish the Mirador Basin Project, the area was much troubled. Since the site’s discovery in 1926, treasure thieves had devastated the exposed archaeological sites—many of the characteristic white plaster reliefs were destroyed or stolen.

Locals guard the site from thieves, but also learn to care for the ecosystem surrounding the ancient cities. The project also funds literacy and other developmental courses, partially with tourism revenue.

Today, fires set by locals to clear land for agriculture are the greatest threat to the site. Hansen says the short-term benefits of clearing the land this way do not outweigh the long-term damages to local livelihood that comes with destroying the ecosystem.

Almost 2,000 years ago, the Mayan civilization collapsed due to the depredation of natural resources, Hansen explains. Hansen is an archaeologist from Idaho University, director of the Mirador Basin Project, and president of the Foundation for Anthropological Research and Environmental Studies (FARES). The Mayans had to migrate after exhausting their local resources, he says.

“Imagine the message it carries for the current government. If that ancient abuse provoked a collapse, it’s strange that we are doing the same,” Hansen says.

In 2003, local farmers started a great fire to create new land for crops, burning more than 98,000 acres (40,000 hectares) of forest in the region. The international scientific community and environmental organizations were alarmed.

“[Locals] continue deforesting—chopping down trees and burning them,” Hansen said in April.

The Global Heritage Fund (GHF) is working with the Mirador Basin Project to educate locals, but the groups are seeking further support within Guatemala and beyond its borders to step up preservation efforts.

GHF Director of Global Projects Dan Thompson describes the Guatemalan population he works with as “warm, gentle people willing to communicate and share their lives and culture, despite the significant language barrier.”

“I think the pride of their cultural heritage is bigger as the project moves forward, which is a benefit to everybody in the long term,” he says.

People who once earned a living by clearing land, stealing, and other illegal means are now gainfully employed. The GHF-funded project employs more than 200 Guatemalans each year, and provides courses in computers, tourism, and other subjects.

GHF seeks to reconnect locals with their heritage, explained Elinor Betesh, GHF public relations manager. “All the cultural engagement and training classes are meant to strengthen that bond again. … It’s what makes them, and the place, so special.”

The 51 cities, of which eight of the largest are the particular focus of preservation and tourism, were home to approximately 1 million Mayans about 3,000 years ago. The Mayans built more than 1,000 pyramids in the region.

A Mayan pyramids differs from an Egyptian one in that it does not have a funerary function, but rather a ritualistic one. A small room is found in the pinnacle. Intricate reliefs line the stairway that ascends to the room, visited frequently for rituals.

Mayans from the Cuenca were great astronomers. Astronomy guided their agricultural production and their daily lives. The pyramids are oriented with the solstices and equinoxes, reminding the population of its connection with the rest of the cosmos and celestial phenomena.

Thompson says Carmelita, near Cuenca Mirador, “has seen dramatic changes as a result of the Mirador project, including the opening of a visitor’s center.”

Carmelita now has 60 guides and 30 trained forest rangers patrolling to protect the archaeological sites, and also for the benefit of visitors and tourists. Thomson notes the project employed 340 members of local communities. Workers on site are offered literacy classes in the afternoon.

The project also helps tourists appreciate the site, and in turn bring resources back to the community.

Guides take tourists through eight of the largest cities and surrounding jungle on a three-day tour. A helicopter ride provides a view from another angle. The private trips attract high-profile tourists such as actors Harrison Ford and Mel Gibson. Gibson collaborates with FARES.

With new preservation technologies parts of the cities are uncovered with greater care, revealing reliefs that have not been eroded. But the Mirador Basin Project is not just an archaeological project—Hansen directs studies in the region of geology, local flora and fauna, Mayan architecture, agriculture, and more.

“I believe the people in the region are well-prepared and want more visitors to come,” Hansen said, “but certainly want to keep their own cultural identity, preserving their way of life.”