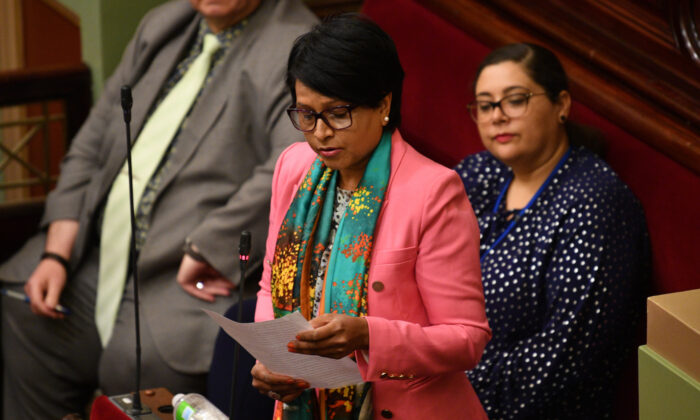 A former Labor MP has come forward about being the target of an alleged “systematic bullying campaign” by Victorian Premier Daniel Andrews and other Labor party members and staff.

Kaushaliya Vaghela, who is now an independent member of the parliament of Victoria, moved a motion in the Legislative Council on March 9 to allege that the premier and the Minister for Women Gabrielle Williams bullied her systematically after she decided to change from the Socialist Left to the Right faction of the Labor party—which was led by former minister Adem Somyurek before the 2018 state election.

Vaghela said that after she switched factions, Williams sent her an angry text message in which she questioned her integrity and demanded that she provide an explanation.

“Little did I know that the text message was (the) opening salvo to the worst period of my life,” she told the chamber in a 20-minute speech.

Vaghela alleges she was subject to nonstop harassment and intimidations from a group of men led by a “personal friend” of the premier and a staff member from his private office as an act of retaliation.

“At events, they would stand over me and invade my space, pointing and laughing, mocking and sneering at me,” Vaghela said.

“Their strategy was to bully, harass and intimidate me to such a degree that I would simply walk away from politics.”

Vaghela also alleged that she received a threatening text message from the premier’s friend at 2 a.m. on April 6, 2019, while another alleged perpetrator allegedly referred to her as a “circus monkey” on social media.

Vaghela said she undertook repeated complaints to the premier’s office, but the Premier and his office did not take any immediate action.

“I complained because I sensed that the bullying would lead to violence of some form at some stage,” she said.

She said her fears came to pass in November 2019 when one of the men angrily grabbed her husband by the bicep as he tried to tell her husband to stay away from the group.

Vaghela’s claims have been transferred to WorkSafe, a state regulator in charge of Victorian workers’ health, safety, and compensations. At the same time, she plans to submit relevant text messages and emails in the week commencing March 7.

She said that her relationship with the premier was good before she left his Socialist Left faction; however, he changed his manner when she became a Labor caucus member.

“He was hostile. He would not speak or acknowledge me. He treated me as if I was invisible,” she said.

“The premier would brush past me at events, and publicly embrace the bullies and their friends as if to reward and encourage their bullying behaviour.”

When the opposition brought up the allegations in the state parliament during question time, Andrews refuted what Vaghela said about his behaviour.

“It is not my intention to make a difficult time for anybody more difficult, but I will not sit here and have things that I think are quite wrong put forward as fact,” he said.

“I do not, nor have I ever or would I ever, conduct myself in that way.”

He said his office had investigated the complaint comprehensively and the staffer alleged of bullying lost his job in the government.

Meanwhile, the minister for women in the state government Williams said in a statement she posted on Twitter that she ‘vehemently rejected’ the allegations which she said were politically motivated.

Vaghela quit the Labor party after breaking its rules last month by crossing the floor to vote for a motion from Somyurek to refer the party’s previous misuse of taxpayer funds for the 2014 election campaign back to the ombudsman for reinvestigation.

The incident is known as the red shirts scandal, where the Labour party improperly used $388,000 (US$284,000) from taxpayer funds to pay political campaign staff. The party has since paid back the amount.