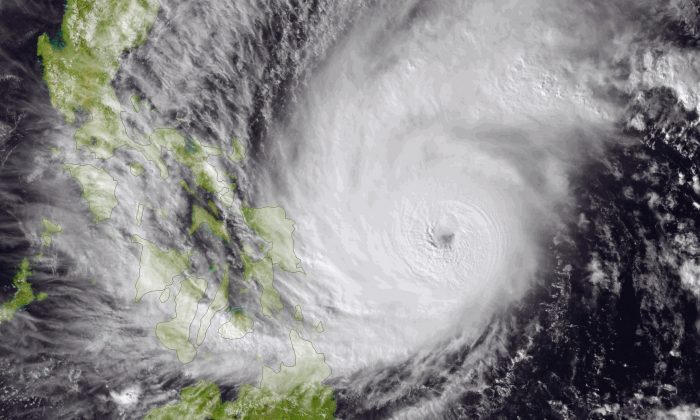 This image made available by the National Oceanic and Atmospheric Administration (NOAA) shows Typhoon Hagupit on Friday, Dec. 5, 2014, as it approaches the Philippines. The ferocious and dangerously erratic typhoon is blowing closer to the Philippines as differing forecasts about its path prompt a wide swath of the country to prepare for a weekend of destructive winds and rain. (AP Photo/NOAA)
Asia & Pacific

LEGAZPI, Philippines—Typhoon Hagupit slammed into the central Philippines’ east coast late Saturday, knocking out power and toppling trees in a region where 650,000 people have fled to safety, still haunted by the massive death and destruction wrought by a monster storm last year.

Packing maximum sustained winds of 175 kilometers (109 miles) per hour and gusts of 210 kph (130 mph), Hagupit made landfall in Dolores, a coastal town facing the Pacific in Eastern Samar province, according to the Philippines’ weather agency. There were no immediate reports of casualties.

Although it was unlikely to reach the unprecedented strength of Typhoon Haiyan, Hagupit’s strong winds and heavy rain were enough to possibly cause major damage to an impoverished region still reeling from the devastating November 2013 storm, which left more than 7,300 people dead or missing.

“There are many trees that have toppled, some of them on the highway,” police Senior Inspector Alex Robin said by phone late Saturday from Dolores, hours before Hagupit made landfall. “We are totally in the dark here. The only light comes from flashlights.”

From Eastern Samar, Hagupit — Filipino for “smash” or “lash” — was expected to hammer parts of a string of island provinces that were devastated by Haiyan’s tsunami-like storm surges and ferocious winds. Hagupit weakened slightly on Saturday, but remained dangerously powerful and erratic.

Robin said about 600 families had hunkered down in Dolores’ three-story municipal hall, one of many emergency shelters in the town.

“Everyone here is just looking for a place to sleep,” he said. “All the windows are closed, but it is still cool because of the wind and the rain.”

Eastern Samar province Rep. Ben Evardone said electricity also was knocked out early Saturday in Borongan city, about 70 kilometers (43 miles) south of Dolores, where the government has set up a command center for rescue and relief operations headed by Interior Secretary Mar Roxas.

Evardone said the strong winds also felled trees and ripped off roofing sheets. “You can hear the whistling of the wind,” he said.

“Everybody is in fear because of what happened during (Haiyan),” Evardone said. “We can already feel the wrath of the typhoon. Everybody is praying.”

Big waves have pushed seawater over concrete walls along a boulevard, flooding it, Evardone said.

Army troops deployed to supermarkets and major roads in provinces in the typhoon’s path to prevent looting and chaos and clear debris, all of which slowed the government’s response last year, said Gen. Gregorio Pio Catapang, head of the Philippines’ 120,000-strong military.

“We’re on red alert, so the entire armed forces is being mobilized for this typhoon,” Catapang said at a news conference.

While unlikely to reach Haiyan’s strength, forecasters said Hagupit’s maximum sustained winds and gusts were strong enough to set off deadly storm surges and landslides and cause heavy damage to communities and agriculture.

With a whirling band of rain clouds spanning 600 kilometers (373 miles), Hagupit has gained speed and was moving westward at 16 kph (10 mph), according to forecasters.

In the central city of Tacloban, where Haiyan’s storm surges killed thousands of people and leveled villages, news of the approaching typhoon rekindled painful memories. Many residents fled to storm shelters, a sports stadium and churches even before authorities urged them to evacuate.

“I’m scared,” said Haiyan survivor Jojo Moro. “I’m praying to God not to let another disaster strike us again. We haven’t recovered from the first.”

The 42-year-old businessman, who lost his wife, daughter and mother last year in Tacloban, said he stocked up on sardines, instant noodles, eggs and water.

Around 650,000 people have been moved to safety, including in Tacloban. A U.N. humanitarian agency spokesman, Denis McClean, said in Geneva that it was one of the largest peacetime evacuations in Philippine history. It also was reminiscent of the evacuation of 1 million people along India’s coastline before Cyclone Phailin hit in October 2013.

“We’ve not heard of villagers resisting to be evacuated,” regional disaster-response director Blanche Gobenciong said. “Their trauma is still so fresh.”

In Tacloban, residents stacked sandbags to block floodwaters. One McDonald’s restaurant was closed and boarded up to prevent a repetition of Haiyan’s deluge, which shattered glass panes and doors of business establishments, allowing looting to take place.

The U.S. agency said Hagupit (pronounced HA’-goo-pit) may veer northwest after coming inland and sweep past the southern edge of the capital, Manila, a city of more than 12 million people. The Philippine agency, known by its acronym PAGASA, projected a more southern path.

Gobenciong said the unpredictable path made it harder to ascertain which areas would be hit, but added that everybody “should prepare for the worst.”

“We have a zero-casualty target,” she said. “Just one loss of life will really sadden us all and make us wonder what went wrong.”

From The Associated Press. AP writer Jim Gomez in Manila contributed to this report.